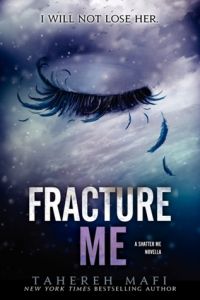 In this electrifying sixty-page companion novella to the New York Timesbestselling Shatter Me series, discover the fate of the Omega Point rebels as they go up against The Reestablishment. Set during and soon after the final moments of Unravel Me, Fracture Me is told from Adam's perspective.

As Omega Point prepares to launch an all-out assault on The Reestablishment soldiers stationed in Sector 45, Adam's focus couldn't be further from the upcoming battle. He's reeling from his breakup with Juliette, scared for his best friend's life, and as concerned as ever for his brother James's safety. And just as Adam begins to wonder if this life is really for him, the alarms sound. It's time for war.

On the battlefield, it seems like the odds are in their favor—but taking down Warner, Adam's newly discovered half brother, won't be that easy. The Reestablishment can't tolerate a rebellion, and they'll do anything to crush the resistance . . . including killing everyone Adam has ever cared about.

This is a short novella of the Shatter Me series that bridges the gap between Unravel Me and Ignite Me.  It is told from Adam’s point of view and I think it is a truly important part of the series.

Adam, Adam, Adam.  This novella really digs into his head and leaves me with such mixed feelings about who he is, both for himself and for Juliette.  I don’t want to give too much away, but I think it makes you wonder about the depth of his love for Juliette… maybe even if it is truly her that he loves or the idea of her that he has created in his own head.  There is a fine line between loving someone for who they are and who you think or want them to be.  How he sees Julietee is so very different from how Warner sees her and that really adds a whole new dimension to it all.  It is also a story about choices, hard choices.  Not  just in love, but in life.

I think this is a story that will change opinions on Adam, whether for better or worse.  But my rating isn’t on the character, it is on the value of the story and I loved it.

Regardless of his character, I think this is a big part of the series to really “get” Adam.

« Unravel Me
Ignite Me »