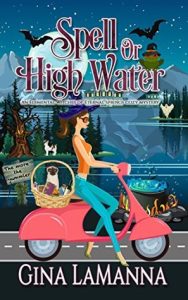 Water witch Evian Brooks has plenty of problems — and a margarita-loving toad is the least of them. Her scooter is on the fritz, her radio show has three listeners per week (including her mother) and there’s a beauty pageant in town threatening to kill her with boredom. However, the promise of death becomes all too real when Evian finds herself accidentally off-roading into a crime scene where Marilyn Johnson — famed beauty queen — is dead in the water.

When Marilyn’s death is ruled a homicide, Evian starts asking questions. After all, if she can’t drive ratings for her show, she’ll be next on the chopping block. Meanwhile, the medical examiner is covering up evidence, the beauty contestants are brimming with secrets and a slew of wannabe karaoke stars are lying through their vocal cords.
Evian’s not sure who to trust, but with grudging help from her toad and annoying input from a coven of elders, she’s determined to unmask Eternal Springs’s murderer — before she’s next.

This book can be read as a standalone. It is book 4 in a 4 book series.

keywords/phrases: murder, magic, beauty pageants
mood reading:
in the mood for a cozy with quirky characters

I think the unsung best character of this book must be Paul, Evian’s familiar, a toad who has a weakness for margaritas. He’s snarky as hell and a perfect comedic foil to the murder mystery at hand.

Evian inadvertently finds the body of a beauty pageant contestant, who until her death was poised to bag her 60th win. That alone provides a possible motive for her murder. But Evian, a local radio station owner looking to increase her audience, decides there’s more to the story and decides to investigate. Lots of twists and turns make this a fun one to read! 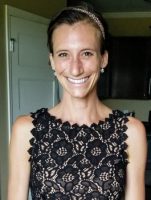 Originally from St. Paul, Minnesota, Gina LaManna has also called Italy and Los Angeles home. After studying numbers and equations in college, she realized multiple choice tests were “just not for her” and began writing books instead. She loves cappuccino foam and whipped cream and would subsist solely on sprinkles if possible. She currently lives in St. Paul with her wonderful husband and family.