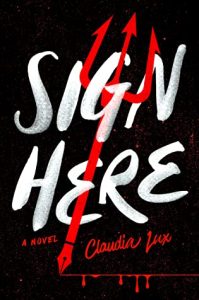 A darkly humorous, surprisingly poignant, and utterly gripping debut novel about a guy who works in Hell (literally) and is on the cusp of a big promotion if only he can get one more member of the wealthy Harrison family to sell their soul.

Peyote Trip has a pretty good gig in the deals department on the fifth floor of Hell. Sure, none of the pens work, the coffee machine has been out of order for a century, and the only drink on offer is Jägermeister, but Pey has a plan—and all he needs is one last member of the Harrison family to sell their soul.

When the Harrisons retreat to the family lake house for the summer, with their daughter Mickey’s precocious new friend, Ruth, in tow, the opportunity Pey has waited a millennium for might finally be in his grasp. And with the help of his charismatic coworker Calamity, he sets a plan in motion.

But things aren’t always as they seem, on Earth or in Hell. And as old secrets and new dangers scrape away at the Harrisons’ shiny surface, revealing the darkness beneath, everyone must face the consequences of their choices.

This was an odd book with a very unique concept, one that left me mixed feelings. It was told through multiple perspectives spread between two storylines. One was set among the characters of Hell, the other among the Harrison family. For 90% of the book, the two storylines felt completely disconnected. Even the feel and texture of the writing was very different between them. The hell storyline read like a dark comedy, a lot of tongue-in-cheek moments, like the fact that the main character’s name is Peyote Trip or that only Jäegermeister was served in Hell’s bars, instead of cold beer, cocktails, or wine. In contrast, the Harrison storyline read like a classic domestic thriller. It felt like two entirely separate books. That being said, I enjoyed both stories. I just wish there had been a stronger connection between them throughout the book instead of just the last part of the book, hence my mixed feelings.

The characters were the highlight of the Hell part of the book for me. Peyote was a dealmaker in Hell (think Crowley, the Crossroads demon from Supernatural) whose job is to sign souls into Hell. Cal is another dealmaker, new to the job. Pey is drawn to her at first, but soon realizes she’s keeping some big secrets from him. But he’s hiding things, too. Pey, despite being where he is and doing what he does, is oddly hopeful. Cal, too, is a bit of a dichotomy, between the personna she adopts and hell and her backstory. At first, it was their part of the book that really drew me in, the dark comedy of it. But there were moments when the dark humor seemed almost forced.

The Harrison storyline was totally different. The multiple perspectives created an intriguing domestic thriller full of twists and turns. Secrets, lies, betrayal, death… all the thing needed for a good thriller storyline. The level of dysfunction wasn’t immediately apparent at the beginning, but as the reader delves deeper into the characters, the cracks become visible. Silas, for the most part, comes off as the more likeable parent, close to his kids, open and somewhat hurt by his wife’s coldness toward him. But there are moments when his darkness is all too obvious. Lily’s issues are much more obvious, and she often comes off as manipulative and cold. But as the story unfolds, perceptions change.

All in all, an interesting read! 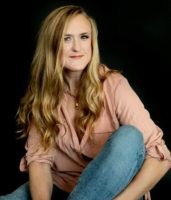 Claudia Lux is a graduate of Sarah Lawrence College and has a master’s in social work from the University of Texas at Austin. She lives and works in Boston, Massachusetts. Sign Here is her first novel.