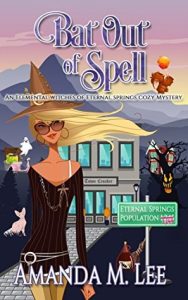 Welcome to Eternal Springs, home to more than a thousand “normal” people and four feisty witches. Just a tip, the witches are more fun.
Especially Skye Thornton, an air witch about town who would rather be on the mainland than a touristy island that’s home to four climate zones and a gaping hole under the local school that allows monsters to creep through and wreak havoc on the community.
A reporter, Skye likes to be in the thick of things – she’s a busybody and proud of it – until she quite literally trips over a dead body at the island resort. In quick order, she finds herself fighting off monsters while trying to discover one of the human variety.
Since she can’t keep clear of trouble, Skye is determined to track down a murderer, fight off a wishing well beast and stay away from a local security chief who she’s always hated … or has she?
It’s a full slate of activity for Skye and her witchy friends. The laughs and insults will be flying fast and furious. Of course, so will the danger.
Look out world, here come four witches with attitude, and they’re not taking any prisoners.

I have very mixed opinions about this book. On one hand, I enjoyed the mystery of it. There were some interesting suspects, and a lot of twists and turns made the path to the bad guy engrossing. As the meat of the book, I liked it.

On the other hand, there was a moment of weight-shaming that seemed totally unnecessary. But it was small moment, at least. The bigger problem for me was the characters. For the majority of the book, Skye seemed incredibly juvenile instead of the grown woman she was supposed to be. It’s one thing to be a prankster, but her “pranks” were usually over the top and mean spirited. She came across as a shallow Mean Girl. And unfortunately, that characterization seemed to extend equally to her familiar, a bat who seemed equally hateful and mean.

When I was a kid, I was torn between whether or not I was going to grow up and be the Incredible Hulk or Wonder Woman. I flirted with being a Jedi Knight for awhile, but I wasn’t up for the intense travel associated with the gig. In my teens, I settled on being a writer — although I had no idea the effort that would entail.
Not only am I a writer now, but I’m a writer in several different mediums. I’m a longtime newspaper reporter, an avid reader and a voracious science fiction fanatic.

« Hour of the Witch
Hunted Blitz »