It's taken a long time for me to feel like a normal teenager. But now that I'm settled in a new school, where people know me as more than Charlotte Silver of the infamous Silver family paranormal investigators, it feels like everything is falling into place. And what better way to be normal than to go on a date with a popular football star like Harris Abbott? After all, it's not as if Noah is anything more than a friend….

But my new life takes a disturbing turn when Harris brings me to a party and we play a game called One Hundred Candles. It seems like harmless, ghostly fun. Until spirits unleashed by the game start showing up at school. Now my friends and family are in very real danger, and the door that I've opened into another realm may yield deadly consequences.

Until recently, Charlotte Silver has been the youngest in a globe-trotting, nomadic family of ghost debunkers.  Stability is something she has never known but has always wanted.  Finally, her family has decided it is time to form a home base, and Charlotte is thrilled.  She has a new best friend, cute boys, and a social life.  She is starting to feel as if she belongs, has a home.

This is the second full-length book in the series, following the first, Past Midnight, and a bridging novella, Raising the Dead (only available online).  I think it is my favorite of the series thus far.  It has all the thrills and chills necessary for a great ghost story, but this book is so much more than that.  Purnhagan has created a story in which the paranormal themes ride right alongside the mundane.  The blend is perfect, allowing the everyday drama of Charlotte’s life to be just as important.  Charlotte is a wonderful lead character, entirely believable and relatable.  The emotional pull between the characters drew me into the story just as much as the paranormal aspect.

One of things that I truly love about this series, beyond the blend of the paranormal and the mundane, is the character creation.  All of the characters, both main and supporting, are equally well-developed.  That, in my opinion, creates a better, fuller backdrop for the main characters and the plot.

I love this series!  Next up is Haunting the Night, also available only online. 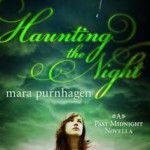