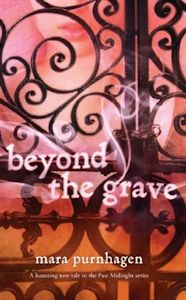 A haunting new tale in the Past Midnight series...

I can’t move forward with my life until I know my demons are confined to the past...

Being Charlotte Silver, the daughter of famous paranormal investigators, means my life isn’t like that of other teenage girls. Especially after what happened to my parents. Things changed. I missed prom and deferred my big college plans. But I still have my boyfriend, Noah. He’s everything I could want—if I can figure out what’s up with him. Suddenly Noah is secretive.

I fear it has something to do with what happened to us three months ago. The bruise Noah suffered during a paranormal attack has never completely faded. Now I’ve learned Noah is researching demons. And when he disappears, it’s up to me to find him—before something else does.

Beyond the Grave is the last book in the series, and I am going to miss it!  That being said, this book was not my favorite of the series.  While it was still a great read, it seemed to lack a little of the punch the previous installments had.  For the epic conclusion of the series, I think I expected a little more action and, while there was action, I just think the story would have felt fuller with more.  There was such a build up throughout the previous novels and novellas that it left me feeling a little like some key scenes had been cut.  There was also a bit less of the romance that the others stories had, and I missed those emotional pieces of the story.

One thing that I very much did like was the author’s ability to bring in bits of the back story of the series without going off point or dragging down the pace of the story.  The flashbacks were worked into the storyline in a way that allowed the reader to understand or remember situations from previous books without a complete retelling of a scene.

All in all, one of my favorite young adult, paranormal series.

« Haunting the Night
Blood of Requiem »