Born a goddess. Controlled by the Fates. Can Macy's love for her soul mate survive the bonds of time... and death?

17-year old Macy Lockhart is as far from normal as any one girl can be. The problem is, she doesn’t know it yet.

After a bloodstone pendant is mysteriously left on her door, Macy’s life begins to change in ways she’d never dreamed. And while she will eventually come to realize that nothing is ever what it seems, that her life is a tangled web of lies and the Fates themselves pull the strings, for now she is left with only the explanations that they offer her.

Macy is led to believe that if she doesn’t return to a previous doomed life, one in which she served as Queen Cleopatra ‘s handmaiden, the fate of the entire world will be threatened in a way that would destroy history as we know it. She learns that she has lived thousands of lives, each one ending tragically…but none as tragic as this one.

After returning to ancient Egypt, she is faced with heart-wrenching decisions. Unless she interferes with Fate’s plan, the very thing she was born to protect, her soul mate will die leading Marc Antony’s forces against Rome. Can she really stand aside and watch the love of her life die all over again?

Every Last Kiss is the debut novel from author Courtney Cole, and the first in the Bloodstone Saga.  It is a wonderful start, a haunting book that I just couldn’t put down.  It began with Macy, living in modern day Pasadena, California, fresh from a break up with her boyfriend.  In the midst of teenage angst over that break up, she suddenly finds herself in ancient Egypt, the handmaiden and closet confident to Cleopatra herself.  As the mysteries of who and what she is unfolds, Macy/Charmian are caught up in love, loss, loyalty and trying to save future history.

So much of the history of ancient Egypt was lost, and what is known today is very vague.  The author created a “history” based on some facts and embellished them to create a truly fascinating version.  The blend of historically accurate people with fictional characters just added to the story.  The descriptions of ancient Alexandria and the palace itself were wonderful.  There was just enough to allow you as the reader to really “see” it without overwhelming you in descriptive prose.  There was a little bit of everything in the story:  love, loss, history, tragedy, intrigue, hope.  It all worked together so well and left me sad that the book was over.  But the next book, Fated, is out early at Barnes & Noble and Amazon in ebook format, with paperback forthcoming!  I will buying it as soon as I have posted this review! This is a fantastic read that I highly recommend DEVOURING! 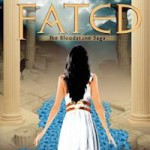