Seventeen-year old Macy Lockhart thought she had it all figured out.

As a Keeper in the ancient organization, the Order of the Moirae, she literally holds fate in her hands. She lives over and over in lives that end tragically; all to further the good of mankind as she does her part to control destiny.
But there’s one lesson that she hasn’t learned well enough. Nothing is ever what it seems.

Startling new revelations about her identity surface and Macy realizes that she’s more important than she ever imagined.

As she struggles to grasp her new reality, everyone she loves is threatened. Is she strong enough to save them all?

Fated is the second book in the Bloodstone Saga and is every bit as wonderful as the first book.  Macy is back in Pasadena, living her current life and waiting for her new Daedal to come into her life again.  From the moment Macy meets her, things begin to go very differently than ever before and she realizes something is very wrong.  She quickly realizes that nothing is as it seems, including herself.

This book goes in a completely different direction than the first, and there are a lot of unexpected twists and turns that led to things I didn’t expect at all.  Once again, the author weaves actual mythology and legend and real people with the fictional and it is absolutely seamless.  While the first explored ancient Egypt and its mythology, this book delves into Greek mythology.  Her ability to maintain the integrity of the true mythology while also layering her own with it is amazing and makes for a very absorbing read. I highly recommend picking up this book, as wells as Every Last Kiss, and you won’t be disappointed!  The next book in the series comes out in the fall of this year and I can’t wait for it! 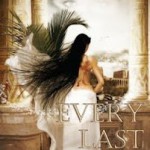