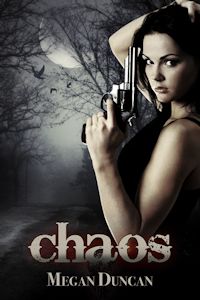 Is any shot at living, worth dying for?
They thought they’d be safe, but a world ruled by chaos doesn’t die easily.
When Max turned on the radio transmissions assuring safety, they came. But, it wasn’t just survivors of the demon apocalypse that crawled their way into the abandoned military base. A myriad of beastly demons unlike any they’ve ever seen, came as well. Abby, and her companions, struggle to survive as the evil around them grows. Desperate to endure, and to defend their fellow survivors, Abby and a squad of fierce fighters, take on a dangerous mission that has deadly consequences.

Chaos follows Released, and continues the story of Abby, Carter, and Max as they struggle to survive in the new world that they have found themselves.  A demon apocalpyse has changed the world as they know it, but instead of giving up, they have figured out how to fight them and keep their place in the world.  Everything about this series is wonderful, from the characters to the story itself.  The characters are easy to identify with because they are real, even living in this dystopian world.  They have real problems, real issues, and that makes the alternate world absolutely believable.  And that makes it that much more exciting and scary to read!  Megan has created a world that is so much like our own that it is impossible not to fall into the story and feel as if it is happening right outside your own door.

Abby and Carter have changed roles in a lot of way in this new book, and it has added a level of interest and tension that really added to the story.  Several of the characters from the first book had their own stories in this book and that was great, getting to really know them as a part of this world.  A slew of new characters were added and it created some great story lines that I can’t wait to see more of in the next book in the series.

This is a really great series that I highly recommend!