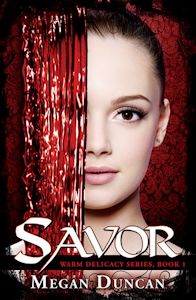 When Claire Miller turned eighteen all she wanted to do was celebrate her birthday, but after a night on the town with her best friend she awakes to a visitor she never expected. The rulers of her region, a vampire royal family, have chosen her to be turned as their new heir and vampire princess. In a world fueled by the power of blood, Claire quickly discovers the vampire royal family is not what they seem and that she has secrets in her past, she never knew existed.

This is the first book in a new series by Megan Duncan, the author of Released.  Claire Miller is your average girl, living in a region where vampires and humans coexist relatively peacefully.  She and her best friend Liz are freshly 18, dreaming of what comes next for them.  Nothing could have prepared Claire; not even 18 for more than 24 hours and Claire’s life turns upside down.

From the moment I started the book, I was hooked.  With so much vampire fiction on the market, as much as I love it, sometimes it can get a little stale.  This book came at it from an entirely new direction and it was fresh and exciting!  It was so different from anything I have read before that I just didn’t want to put it down, pulling me in with every page turn.  As with Released, the author pulls you in with the characters, making them fresh and original and entirely identifiable.  Whether they were likeable or not, the surpassed the title “vampire” and were at their core people, with all of the emotions and behaviors that we, as lowly humans, can relate to.

I enjoyed reading this book, engrossed from beginning to end.  And I can’t wait for the next in the series, Indulge, due out in December 2011. And I can’t forget to mention the cover, which I found stunning!  Definately a must read for vampire lovers!