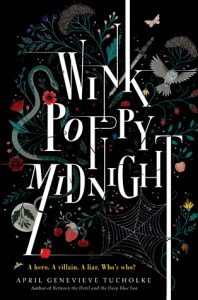 The intrigue of The Virgin Suicides and the "supernatural or not" question of The Unbecoming of Mara Dyer coalesce in this young adult mystery, where nothing is quite as it seems, no one is quite who you think, and everything can change on a dime.
Every story needs a hero.Every story needs a villain.Every story needs a secret.
Wink is the odd, mysterious neighbor girl, wild red hair and freckles. Poppy is the blond bully and the beautiful, manipulative high school queen bee. Midnight is the sweet, uncertain boy caught between them. Wink. Poppy. Midnight. Two girls. One boy. Three voices that burst onto the page in short, sharp, bewitching chapters, and spiral swiftly and inexorably toward something terrible or tricky or tremendous.
What really happened?Someone knows.Someone is lying.


For fans of Holly Black, We Were Liars, and The Raven Boys, this mysterious tale full of intrigue, dread, beauty, and a whiff of something strange will leave you utterly entranced.

April Genevieve Tucholke is the author of Between the Devil and the Deep Blue Sea, Between the Spark and the Burn, Wink Poppy Midnight, The Boneless Mercies, and Seven Endless Forests. She also curated the horror anthology Slasher Girls & Monster Boys. Her books have been published in sixteen countries, and have received ten starred reviews. They have been selected for the Junior Library Guild, Kids’ Indie Next picks, and YALSA Teens Top Ten. When she’s not writing, April likes walking in the woods, exploring abandoned houses, and drinking expensive coffee. She currently resides in the Pacific Northwest with her husband.