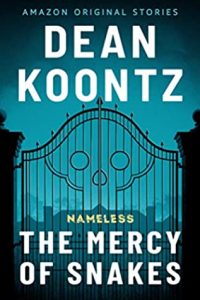 A series of suspicious deaths in a retirement home draws Nameless into the confidence of a terrified former resident—and into the dark heart of a shocking conspiracy. In part five of the Nameless series, it’s time to hunt.
Oakshore Park is Michigan’s most exclusive assisted-living community. Presided over by two killer angels of mercy, it’s also the go-to facility in assisted dying. For a cut, they make impatient heirs happy. Nameless must concoct a scheme just as cunning. But righteous retribution stirs disquiet in the avenger as light starts to shine on the black hole of his past. Should he welcome it or keep running?
From #1 New York Times bestselling author Dean Koontz comes The Mercy of Snakes, part of Nameless, a riveting collection of short stories about a vigilante nomad, stripped of his memories and commissioned to kill. Follow him in each story, which can be read or listened to in a single sitting.