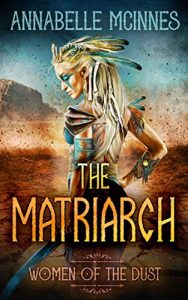 Her citizens are oppressed. His society is diminishing. In a frantic bid for survival, can their fiery union save their peoples?On a scorched and barren future Earth, Yolanda is her people’s only hope. As Matriarch of an all-female nation, the battle-hardened commander fights an impossible war while desperately seeking a way to stop her subjects from dying of thirst. But when the enemy king is beheaded by his own warrior son, she’s offered a truce that will bring the water they urgently need… in return for leaving her populace defenseless.
With his father dead by his hand, the Hammer is determined to rebuild the shattered community the warmongering king’s brutality almost destroyed. In a bold move to strengthen his dwindling numbers, he offers armistice to a dangerous queen and her bloodthirsty horde of fighting women. All he asks in exchange is for her to accompany him to petition the Council to drop their poisonous sanctions…
As they uncover the truth behind the horrific war, Yolanda is surprised when her begrudging respect for her capable companion blossoms into unexpected desire. And though the Hammer learns there’s more to the impassioned fighter than her brutal reputation suggests, he fears giving himself to her could make him a traitor to his own kind.
When their united strength pits them against oppressive factions, will their growing bond become an unbreakable force?
The Matriarch is the thrilling first novel in the Women of the Dust dystopian romance series. If you like enemies-to-lovers, dynamic couples, and empowered feminism, then you’ll adore Annabelle McInnes’s gritty tale.

The Matriarch, the first book in the new Women of the Dust series by Annabelle McInness, is a dystopian romance, set in the midst of two warring nations.

The world-building of this book was excellent. It was so well described that I often felt as if I were there. It was more than reading about a place. I almost experienced the heat, the dust and sand of the barren land. And the mythology of the story was really engaging. One nation was male-led, the other female. The Horde of women have struggled to create a safe haven for women and children, taking in only men of the Horde… those born of a Horde woman. They’ve been largely starved of resourse, forcing them to resort to less than humane, although resourceful, means to survive.

I appreciated the fact that the author created no perfect characters. While the story was clearly meant to showcase the strength of women, they weren’t created to be perfect or better than men. People are more complicated than that, so I’m glad that it wasn’t a clearly defined line between the two in relation to good and evil.

However, I was a little conflicted about some aspects to the story. There was a touch of instalove that felt a little bizarre to me. After all of the long-lived animosity between the two nations, it seemed strange that Yolanda would develop trust in Sasha so quickly. It’s not so much that I hate instalove, but that it seemed out of character for her. Second, as much as the strength of women was at the forefront of the story, there were some moments when the heroine felt more like the damsel in distress, needing the man to save the day.

But all of that being said, they were minor issues, nothing that stopped me from enjoying the book and looking forward to the next!

If you love post-apocalyptic/dystopian fiction, this is an interesting read with a great premise. However, there are definitely some triggery moments with themes of abuse and neglect, graphic violence (including rape), torture.

From the age of sixteen, Annabelle lived in a homeless youth refuge while she remained committed to her education. She spent two years within a section of society that most overlook.

Her experiences are the foundations that drive her stories and her characters. They fight for their freedoms, have courage in the face of adversity and always aspire for greatness.

Annabelle is the author of True Refuge, an International Best Seller and a finalist for the Australian Romantic Book of the Year (RuBY) in 2018. She is privileged to live in a small rural town in country New South Wales and writes to a distinctive Australian backdrop with its captivating change of seasons.

Outside of her love for reading, she spends her time with her husband, son and her fifteen year old poodle named Serendipity. She drinks her Whisky neat and can often be found at the local market hunting for blue cheese and artisan bread.

« Preorder A Roar of Flames!
Cover Reveal: Where the Briars Sleep »