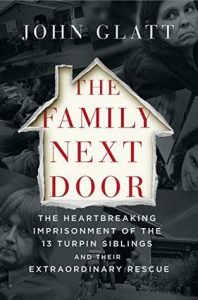 From New York Times bestselling true crime author John Glatt comes the devastating story of the Turpins: a seemingly normal family whose dark secrets would shock and captivate the world.
On January 14, 2018, a seventeen-year-old girl climbed out of the window of her Perris, California home and dialed 911 with shaking fingers. Struggling to stay calm, she told the operator that she and her 12 siblings--ranging in age from 2 to 29--were being abused by their parents. When the dispatcher asked for her address, the girl hesitated. "I've never been out," she stammered.
To their family, neighbors, and online friends, Louise and David Turpin presented a picture of domestic bliss: dressing their thirteen children in matching outfits and buying them expensive gifts. But what police discovered when they entered the Turpin family home would eclipse the most shocking child abuse cases in history. For years, David and Louise had kept their children in increasing isolation, trapping them in a sinister world of torture, abuse, and near starvation.
In the first major account of the case, investigative journalist and author John Glatt delves into the disturbing details and recounts the bravery of the thirteen siblings in the face of unimaginable horror.

English-born John Glatt is the author of Lost and Found, Secrets in the Cellar, Playing with Fire, and many other bestselling books of true crime. He has more than 30 years of experience as an investigative journalist in England and America. Glatt left school at 16 and worked a variety of jobs—including tea boy and messenger—before joining a small weekly newspaper. He freelanced at several English newspapers, then in 1981 moved to New York, where he joined the staff for News Limited and freelanced for publications including Newsweek and the New York Post. His first book, a biography of Bill Graham, was published in 1981, and he published For I Have Sinned, his first book of true crime, in 1998. He has appeared on television and radio programs all over the world, including Dateline NBC, Fox News, Current Affair, BBC World, and A&E Biography. He and his wife Gail divide their time between New York City, the Catskill Mountains and London.