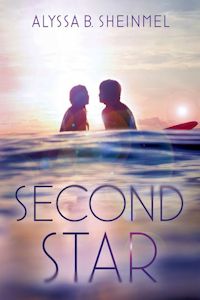 A twisty story about love, loss, and lies, this contemporary oceanside adventure is tinged with a touch of dark magic as it follows seventeen-year-old Wendy Darling on a search for her missing surfer brothers. Wendy’s journey leads her to a mysterious hidden cove inhabited by a tribe of young renegade surfers, most of them runaways like her brothers. Wendy is instantly drawn to the cove’s charismatic leader, Pete, but her search also points her toward his nemesis, the drug-dealing Jas. Enigmatic, dangerous, and handsome, Jas pulls Wendy in even as she's falling hard for Pete. A radical reinvention of J. M. Barrie's classic tale, Second Star is an irresistible summer romance about two young men who have yet to grow up—and the troubled beauty trapped between them.

Having recently read the classic Peter Pan, I was intrigued by the idea of a retelling of that story.  I am a sucker for fairy tale retellings and this is the first one I have come across that is based on that story.

Second Star is tells a very different story than that of the original Peter Pan, especially the Disney adaptation with which most of us are familiar.  There are themes that are much darker and more intense, very much a modern-day retelling.  Although it is set in California, much of it takes place on a hidden beach that gives the feeling of the fairy tale land far, far away.  It is definitely not the Neverland we remember, but it is still a place that is created to be somehow separate from the rest of the world.

Wendy is a great character, one I feel that many of us can relate to.  She is living in the sort of limbo that happens when you have lost someone close to you.  She is suffering and lost, but she puts that all aside to put on brave face for those around her.  She is unable to accept the loss and she is determined to learn the truth.  To that end, she goes on a journey that takes her to places she could not have imagined.

Pete and Jas, our Wendy’s potential love interests, are not the typical love-triangle boyfriends, the good guy versus the bad guy.  Each of them has elements of both.  Pete (our obvious Peter Pan) cares for the people in his “family” and is fiercely loyal to them, but he also has his secrets that seem to keep him a bit aloof.  Jas (our Hook) is more open about his bad boy ways, but he seems to have a more realistic and true idea of love and relationships.

There a lot of dark themes in this book.  Death, loss, disappointment, betrayal, distrust, drugs.  Most of these things are not the kinds of things we would normally expect in Neverland, but they are an integral part of the story.  The drug arc is a big part of the story, the “fairy dust” reworked.  This arc played into several of the story lines and there was no small amount of tragedy attached to it.  Some may not like the emphasis on this aspect, but I thought it played in well to not only the surf culture, but to some of the other things (no spoilers) that occurred towards the end.

While there was romance, the true story was found in Wendy’s journey.  There was a lot of mystery and not a lot of obvious clues.  However, once the story was resolved, I was able to look back and see some foreshadowing.

The air around him is bright, like the stars are following him, his very own spotlight (Loc. 62).

The water rises with a gentle touch, the sea wrapping its cool arms around me (Loc. 62).

I enjoyed this book very much.  You will not find the Wendy Darling, Peter Pan, Captain Hook, or John and Michael of your childhood.  The story is much darker, more intense.

I was born in Stanford, California, and even though I moved across the country to New York when I was six years old, I still think of myself as a California girl.

Like so many writers, I grew up loving books. I loved stories so much that when there was nothing to read, I wrote my own stories just to give myself something to read. And when there was no pen and paper to be had, I made up stories and acted them out by myself. I played all the parts, and I was never bored. 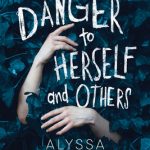 A Danger to Herself and Others

« A Tale of Two Centuries
My Not So Super Sweet Life »