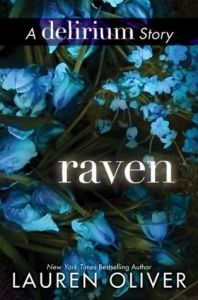 This captivating story set in the world of Lauren Oliver’s New York Times bestselling Delirium series focuses on Raven, the fiery leader of a rebel group in the Wilds.

As a teenager, Raven made the split-second decision to flee across the border to the Wilds, compelled to save an abandoned newborn—a baby girl left for dead and already blue from the cold. When she and the baby are taken in by a band of rebels, Raven finds herself an outsider within a tight-knit group. The only other newcomer is an untrustworthy boy known as the Thief until he finally earns himself a new name: Tack.

Now she and Tack are inseparable, committed to each other, the fledgling rebellion, and a future together. But as they both take center stage in the fight, Raven must decide whether the dangers of the revolution are worth risking her dreams of a peaceful life with Tack.

As her story hurtles back and forth between past and present, Raven transforms from a scared girl newly arrived in the Wilds to the tough leader who helps Lena save former Deliria-Free poster boy Julian Fineman from a death sentence. Whatever the original mission may have been, Raven abides by a conviction that she believes to her core: You always return for the people you love.

Raven was a great addition to the Delirium series, giving us a lot more insight into the character.  I think this just might be my favorite of the Delirium novellas.  She is one of those characters that I didn’t fall in love with right from the beginning.  I didn’t understand her.  Sometimes I loved her, sometimes she annoyed me, and sometimes she just confused me.  But this novella really explains her.  The novella goes back and forth and time, introducing her to us just after she has escaped into the Wilds.  We also learn more about Tack and his relationship with her.  His story is just as important to her as is her own and it was interesting to see how they came to be who they are together.  There is so much more to her than initially meets the eye.