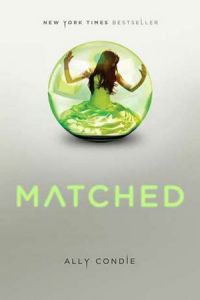 Cassia has always trusted the Society to make the right choices for her: what to read, what to watch, what to believe. So when Xander's face appears on-screen at her Matching ceremony, Cassia knows with complete certainty that he is her ideal mate... until she sees Ky Markham's face flash for an instant before the screen fades to black.

The Society tells her it's a glitch, a rare malfunction, and that she should focus on the happy life she's destined to lead with Xander. But Cassia can't stop thinking about Ky, and as they slowly fall in love, Cassia begins to doubt the Society's infallibility and is faced with an impossible choice: between Xander and Ky, between the only life she's known and a path that no one else has dared to follow.

This book hooked me from the very first page!  The world of Matched is the epitome of a utopian dystopia, a world that seems almost perfect on the surface.  But at what cost?

It is a world that makes you wonder if it is really worth the sacrifice to have that utopia.  Disease has been almost eradicated, as has poverty, hunger, etc.  There is no religion and no politics… eliminating much of the world’s source of strife.  But it can also be extremely suffocating in the totalitarian control of the Society.  Individuality is discouraged, optimum efficiency encouraged.  Every aspect of one’s life is strictly regulated…  marriage, family, careers, even the culture the society.  Culture is limited to 100 pieces of music, paintings, books, etc., all chosen by a committee long ago after it was decided that too much culture was too confusing, too overwhelming.

There is a certain complacence that occurs when in a situation of total control.  You accept things easily.  You don’t question anything.  You often don’t even consider that there are other ways, other ideas.  Cassia is an interesting character.  On the surface, she is a mild-mannered, conforming Society girl.  But when certain things happen to her, her perspective begins to change.  A big part of this is because of Ky and Xander.  She has known both boys since childhood.  Xander is her best friend and now her Match, the epitome of a Society boy.  Ky is a bit mysterious, with a story of his own that makes him unacceptable for Matching.  The story that unfolds around them makes Cassia finally question the world she lives in.

This is a book that makes you really think about the world that you live in and what sacrifices you would make.  Is it worth the sacrifice of individuality or freedom to live in a perfect world?  Is there any such thing?  Is it worth the loss of anticipation, the unexpected?  Is it worth living in a world that will be rather stagnant and resistant to change?

If you love the concepts of utopia versus dystopia, this is a great read.  It is a book that makes you think and consider your own world!