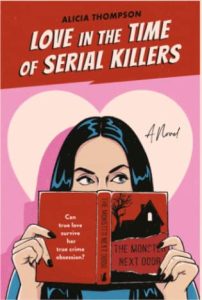 Turns out that reading nothing but true crime isn’t exactly conducive to modern dating—and one woman is going to have to learn how to give love a chance when she’s used to suspecting the worst.

PhD candidate Phoebe Walsh has always been obsessed with true crime. She’s even analyzing the genre in her dissertation—if she can manage to finish writing it. It’s hard to find the time while she spends the summer in Florida, cleaning out her childhood home, dealing with her obnoxiously good-natured younger brother, and grappling with the complicated feelings of mourning a father she hadn’t had a relationship with for years.

It doesn’t help that she’s low-key convinced that her new neighbor, Sam Dennings, is a serial killer (he may dress business casual by day, but at night he’s clearly up to something). It’s not long before Phoebe realizes that Sam might be something much scarier—a genuinely nice guy who can pierce her armor to reach her vulnerable heart.

When I saw the blurb for this book, I knew I had to have it. The true-crime aspect just spoke to me, as a true-crime addict myself. I loved the idea of a PhD candidate using it as the basis of her dissertation, since it’s a genre that’s often denigrated by the masses as being “unworthy.” So I was intrigued by the idea of it being deemed academically worthy in the story. And if the blurb wasn’t enough… the cover! I’m not usually drawn in by graphic cover styles, but this one was the exception. It’s fun, it’s bright, and it’s eye-catching.

This is a book that is somehow both hilarious and deeply emotional, and I really loved that. Phoebe is truly obsessed with true crime, so immersed in it that has fully informed her thinking and how she views the world around her. Inevitably, that has affected how she deals with people around her. Which makes her meet-cute with Sam that much more hilarious. He offers to help her, and she immediately assumes he’s the newest Ted Bundy. As a true crime enthusiast, I understand this, even if I don’t do it myself! But there are darker moments, too. She’s dealing with the recent death of her father, from whom she was largely estranged. The situation has forced her to face some things she thought she’d dealt with long ago. But family dysfunction and emotional trauma has a way of coming back, and she’s struggling with that. And on top of it, she’s inexplicably struggling to complete her dissertation, a deadline looming.

On the surface, Phoebe might not be the most likable character. For much of the book, she’s emotionally closed off, which made her come off as overly prickly sometimes. Sometimes, she doesn’t know the line between appropriate and inappropriate sarcasm. But while I see that that could be off-putting, I felt it was in keeping with her character. There are reasons why she is the way she is, reasons we begin to understand as the story unfolds. So if anything, that made her more sympathetic to me. In contrast, Sam is far more easily likable, but that doesn’t make him a milquetoast character. He has hidden depths, and a deep compassion for the people around him. I truly loved him as a character. Together, their chemistry was beautiful and their banter so witty. I loved them as a romantic couple!

Along with the true crime and the smart heroine, I loved the renewal of friendship between Phoebe and Alison. Alison was open-hearted and kind, forgiving… all the things Phoebe needed. Loved that!

Personally, I didn’t mind the amount of unexplained true-crime references. But that’s because I am a true-crime buff, so I got them. There were a lot of them, and if you aren’t in the true-crime world, they would probably pull you out of the story, which is never what you want.

Lately it felt like my entire life was one big AITA thread and the answer was always yes, it’s me, I’m the asshole.

Things got so much more complicated when you actually cared if someone sent you a text, or accepted an invitation, or wanted to hang out.

I don’t regret giving you my heart, Phoebe. I just wish you’d taken more care with it.

This is hard to matchmake, as I’ve never seen another really that would fly with it. But here we go!

Alicia Thompson graduated from the New College of Florida in 2006 with a degree in psychology, and wrote her debut novel in between pulling all-nighters on her senior thesis. Her short stories, “Abby Greene for President” and “Stealing Mark Twain,” have appeared in Girls’ Life magazine. She is currently working on an MFA in fiction writing at the University of South Florida, where she still pulls the occasional all-nighter.