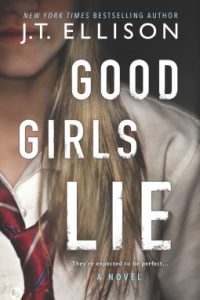 J.T. Ellison’s pulse-pounding new psychological thriller examines the tenuous bonds of friendship, the power of lies and the desperate lengths people will go to in order to protect their secrets.
Goode girls don’t lie…
Perched atop a hill in the tiny town of Marchburg, Virginia, The Goode School is a prestigious prep school known as a Silent Ivy. The boarding school of choice for daughters of the rich and influential, it accepts only the best and the brightest. Its elite status, long-held traditions and honor code are ideal for preparing exceptional young women for brilliant futures at Ivy League universities and beyond.
But a stranger has come to Goode, and this ivy has turned poisonous.
In a world where appearances are everything, as long as students pretend to follow the rules, no one questions the cruelties of the secret societies or the dubious behavior of the privileged young women who expect to get away with murder.
When a popular student is found dead, the truth cannot be ignored. Rumors suggest she was struggling with a secret that drove her to suicide.
But look closely…because there are truths and there are lies, and then there is everything that really happened.
Don’t miss this fast-paced suspense story from New York Times bestselling author J.T. Ellison!

Good Girls Lie is a twisty, thriller that was much darker than is usually found in young adult books, and I loved every bit of that.

The story takes place in an elite, all-girls, private boarding school, a school that comes with an interesting history to say the least. The school’s honor code is the most important covenant to the school community, and to break it is virtually unheard of. But there are exceptions… the secret societies that are a barely hidden secret.

The atmosphere of the book is very gothic, giving the story a deliciously creepy feeling. The old buildings of the school, the iron gates, the sometimes dark history of the school. And that atmosphere really underscored the dark aspects of the story. From the very beginning, there is the overwhelming realization that things are not what they appear in the school and with some of the girls. There are secrets at every turn.

Perhaps even more than the atmosphere, the characters drove the story. The Goode girls, by and large, came from wealthy, powerful families. They are smart, driven, used to getting their own way. And the education they get at Goode is at a much higher level than one might expect, as most of the girls are Ivy League-bound.

This is a twisted tale of manipulation, secrets, broken trusts, and revenge!

J.T. Ellison began her career as a presidential appointee in the White House, where a nuclear physicist taught her how to obsess over travel itineraries and make a seriously good pot of Earl Grey, spawning both her love of loose leaf and a desire for control of her own destiny. Jaded by the political climate in D.C., she made her way back to her first love, creative writing. More than 20 novels later, she is an award-winning New York Times and USA Today bestselling author with thrillers published in 27 countries and 15 languages. She is also the EMMY-award winning cohost of A WORD ON WORDS, a literary interview TV show. She lives in Nashville with her husband and two small gray minions, known as cats in some cultures. She thinks they’re furry aliens.

« The Last Thing He Told Me
Reading List: the Summer Edition »