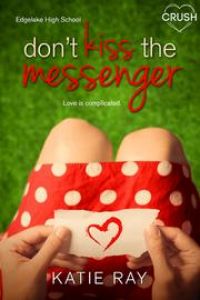 For most of her teenage life, CeCe Edmonds has been dealing with the stares and the not-so-polite whispers that follow her around Edgelake High. So she has a large scar on her face—Harry Potter had one on his forehead and people still liked him.

Bryn asks CeCe to help her compose messages that’ll charm Emmett. CeCe isn’t sure there’s anything in his head worth charming but agrees anyway—she’s a sucker for a good romance. Unfortunately, the more messages she sends and the more they run into each other, the more she realizes there’s plenty in his head, from food to literature. Too bad Emmett seems to be falling for the wrong girl…

I loved everything about Don’t Kiss the Messenger!  For me, this story was very much driven by the varied cast of characters.  I loved that they weren’t cast as ideals, but with the flaws and hangups that we all can relate to.

CeCe Edmonds was in a devasting crash that left her scarred in what was probably the worst place for a girl/woman… her face.  For her entire life, she had to endure the stares, the comments, even the outright cruel jeers.  Eventually, she learned to cope by accepting it and herself as she was, dealing with it with a combination of humor and outright badassery.

Emmett Brady is the new guy at school, popular and gorgeous.  But he also has his own story and his own baggage.  CeCe is instantly attracted to him, but does nothing about it because she knows there is no way someone like him would ever consider being more than friends with someone who looked like her.

And this belief is solidified when he meets Bryn DeNeuville, the new girl.  Bryn is CeCe’s friend, but her polar opposite.  Where CeCe is into interesting music and thought-provoking literature, Bryn is all about everything that is popular.  And she has set her eyes on Emmett.  The only problem?  He seems to be the one guy she can’t talk to OR relate to.  So, she turns to CeCe to help her.

It is Cyrano de Bergerac all over again, but modernized and set in the world of teenagers.  There are emotional ups and downs, funny moments and sad.  There were times when I wanted to jump into the book and talk some sense into one character or another.  It is a story that really makes you think about love, relationships, friendships, real beauty, and what it means to be true to yourself.  An amazing read!

My books have been nominated for YALSA awards, and First Comes Love was a finalist for the Oregon Book Award. My screenplay, A HIGH NOTE, was a semifinalist in the Austin Screenplay Competition. I live in beautiful Ashland, Wisconsin, on the shores of Lake Superior, with my husband, son, daughter, and a very high-energy dog.

« Seducing the Stargazer Book Tour
The Infinity of You & Me »