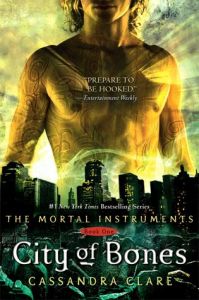 When fifteen-year-old Clary Fray heads out to the Pandemonium Club in New York City, she hardly expects to witness a murder― much less a murder committed by three teenagers covered with strange tattoos and brandishing bizarre weapons. Then the body disappears into thin air. It's hard to call the police when the murderers are invisible to everyone else and when there is nothing―not even a smear of blood―to show that a boy has died. Or was he a boy?

This is Clary's first meeting with the Shadowhunters, warriors dedicated to ridding the earth of demons. It's also her first encounter with Jace, a Shadowhunter who looks a little like an angel and acts a lot like a jerk. Within twenty-four hours Clary is pulled into Jace's world with a vengeance, when her mother disappears and Clary herself is attacked by a demon. But why would demons be interested in ordinary mundanes like Clary and her mother? And how did Clary suddenly get the Sight? The Shadowhunters would like to know...

I was engrossed in City of Bones from the moment I started turning the pages, no matter how late to the game I am for this series!  The characters are fun and varied, the story is rich with mythology and action, and there is a nice mix of humor and romance, too.

The cast of characters is fantastic.  They are all very different and the dynamics between them is often hilarious.  Clary is new to the world of the Shadowhunters.  Her life has been fairly isolated, revolving around her mother Jocelyn, her mother’s best friend Luke, and her own best friend Simon.  Clary and Simon have been best friends since they were very little and they are virtually inseparable.  He is a self-admitted gamer nerd with a fondness for witty T-shirts and she is artistic with a fondness for manga.  The two are often hilarious together.  And then they meet Jace, Alec, and Isabelle.  Jace is the epitome of a pretty boy, gorgeous and often a complete jerk.  Alec is his “sort of” brother and is a bit on the brisk side, clearly a bit protective of Jace and Isabelle, the oldest of them all at eighteen.  Isabelle is Alec’s sister, gorgeous and confident… everything Clary feels she is not.  The dynamic between the three guys is often tense, for very different reasons.  The two girls are not used to having female friends and have virtually no idea how to relate to one another.  The ways in which these five interact is often hilarious, with a lot of witty repartee that I love!

I love a story with a good mythology and this one has that.  The mythology is rich, blending elements that we know with new elements and new explanations.  It creates a story that makes the existence of the supernatural entirely believable.  The mythology is based around that of angels and demons, but incorporates the existence of werewolves, warlocks, faery, and vampires right along with them.  A whole new world is created right along the one that we live in.

The story line is full of action, mystery, intrigue, and romance.  It is often emotional and it was unexpectedly funny in a smart way.  There are a lot of passages of truly witty, and often sarcastic, banter and it comes across as naturally humorous, not contrived.  Simon and Jace were the undisputed kings of witty repartee, especially between them.

If you love a read with supernatural creatures and a richly created mythology, then this is a good read!