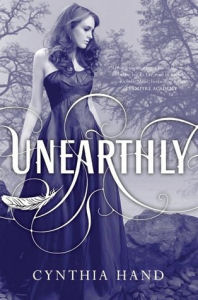 In the beginning, there's a boy standing in the trees . . . .Clara Gardner has recently learned that she's part angel. Having angel blood run through her veins not only makes her smarter, stronger, and faster than humans (a word, she realizes, that no longer applies to her), but it means she has a purpose, something she was put on this earth to do. Figuring out what that is, though, isn't easy.

Her visions of a raging forest fire and an alluring stranger lead her to a new school in a new town. When she meets Christian, who turns out to be the boy of her dreams (literally), everything seems to fall into place—and out of place at the same time. Because there's another guy, Tucker, who appeals to Clara's less angelic side.

As Clara tries to find her way in a world she no longer understands, she encounters unseen dangers and choices she never thought she'd have to make—between honesty and deceit, love and duty, good and evil. When the fire from her vision finally ignites, will Clara be ready to face her destiny?

Unearthly is a moving tale of love and fate, and the struggle between following the rules and following your heart.

The story of Unearthly grabbed me from the very beginning!  The book starts out with mystery, diving right into the story and I loved that.  Clara is amazing as the protagonist.  Even knowing she is something more than human, part angel, she is humble and unsure… just like every teenage girl.  Her younger brother Jeffrey is the perfect younger brother, generally surly and pretty antisocial when it comes to his sister.  But right from the beginning, I knew that it was going to be hard to choose between the two apparent love interests… Team Christian or Team Tucker?  Both of them were really great guys and that love triangle added a lot to the story line!

One of the things that I loved most about this book was the romance aspect.  In all honesty, I am not generally a fan of  true romance novels, novels in which the romance is the central focus.  They tend to be too neatly put together, too formulaic.  And, very often, the lead female is often portrayed as obsessed or unable to stand for herself in the face of love.  THIS WAS NOT THAT BOOK!  The romance was there, but Clara was a strong girl and fully capable of being herself and being true to herself.  There was a depth to the romance that sometimes is left out of YA romances, romance based on something more than hot boys and sparkly vamps, or something like them.  No insane, over the top, teenage “emo-ness” at all.  Actual healthy relationships!  Great message!

The premise of angels and their “purpose” was an interesting bit of Unearthly mythology.  I appreciated that her angels were angels in the traditional sense, not made out to be sexy beasts that somehow remained angelic, but still likable, understandable creatures.  There is the unavoidable aspect of religion and God when an angel story, but the author did a great job of putting God into the story without being offensive to believers or preachy to nonbelievers.

Things to love about Unearthly…

If you like angel reads, this is one of the best I’ve read!