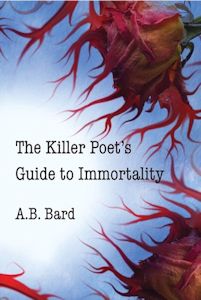 The Killer Poet's Guide to Immortality is the riveting tale of a frustrated poet who decides that the best way to get his work read is by pinning it to corpses with a dagger. Alternately profound and hilarious, this novel chronicles in rapid-fire succession the Killer Poet's serial murder spree, rise to media notoriety, capture, trial, and execution by lethal injection. Then it presses further, into the future . . . According to Jack McCarthy, prize-winner at both the World and National Poetry Slams: "To say that this book is unlike any other book I've ever read or even heard about is the merest brush of the surface of the pleasures it offers. To call it a 'tour de force' falls short. A.B. Bard combines poetry and the novel in a whole new way, and it works delightfully."

The Killer Poet’s Guide to Immortality is in a word… INSANE!  A.B. Bard is not only the author of this highly unusual book, but is the fictional main character, a man who wants his poetry to be read and loved by all.  So he takes a unique approach to promoting his art, leaving pieces of his work in unusual places… on the bodies of those he has murdered,  Reading this book is a lot like being in a tornado, constantly spun at dizzying speeds.  And I mean that in a good way.  It is completely irreverant, satirical, and wildly clever and hysterical.  And through it all, Bard (the poet) is a guy that somehow you just have to like, despite all that he does in the name of his art.  He is clearly a frustrated artist complete with a pretty clear “Eff off” attitude that is seen in both his dialogue and in his poetry scattered throughout the book.  Frequently, his words and thoughts cross the line of anger and frustration and become pure insanity.

As I said before, it was dizzying to read, often mind-boggling and confusing.  But it is supposed to be as you, the reader, are travelling essentially within the brain of an insanely frustrated poet.  Just as soon as I thought I knew where things were going, they changed.  Generally, before I could wrap my mind around these new things, it changed again.  Truly exciting!

It is hard to pin down a genre for this book, because it covers a little bit of just about everything from poetry, sci fi, crime fiction, urban fantasy, humor, and satire.  While faction, Bard’s (the author) use of satire was dead on.

A completely insane book that I thoroughly recommend, but do not expect light and fluffy.  Definitely dark humor!

AB Bard is definitely not the Second Coming of Touchdown Jesus. His manuscript was chucked across the rift torn in the time-space continuum by the Stoppard Meld triggered when the Bard ascended God-on-a-Stick for his second lethal injection. If you think that makes sense, we respectfully request that you stop seeking the Republican nomination for President.

Seriously? BA Reed Communist Training Sleeper Cell. Creative writing adjunct assistant nothing at a community collage near you. Personal assistant to honchos in skyscrapers. Lap to a cat. Pal to a girl. God to a dog. Dog to the man.

Occupy your mind. Then spread your pons and let me in.