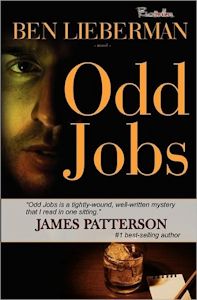 Ten years ago, Kevin Davenport's life was rocked after witnessing the murder of his father. It's tough enough growing up without a father, but now there's not enough money to support himself, his mother and college tuition. But Kevin doesn't give up so easily. He never gets the luxury of a "normal job" and is always on the hustle. And this time is no different. He finds himself working in the corrupt Kosher World Meat Factory, a gritty business controlled by a crime syndicate and filled with a bizarre cast of characters who start turning up dead. Things are never as they seem as Kevin begins to get a little too involved in the lives of hardened criminals. Soon enough, he finds himself in a battle for his life.

Odd Jobs is the debut novel by author Ben Lieberman, a mystery novel that had me turning the pages, unable to put it down.  The plot was well-written and engaging, the action perfectly well-paced.  In my opinion, it’s the characters that drive the story.  Enough of a history is created for them, without overwhelming the story with too much distracting back story.  Kevin Davenport is the real push to the story, a character that is easily believable.  His life hasn’t been easy and the trials and tribulations that he has been through has left him somewhat damaged.  It is those faults that make him a great character.  It makes him real, rather than a larger than life lead that isn’t all that similar to the average reader.

This character, combined with a fabulous plot, gives a book that I truly hope is made into a series, or at least followed by a sequel.  I read the book in a night, completely unable to put it down.  I will definitely be reading more from this author as he publishes!

This was a truly engrossing read that I definitely recommend!

Ben Lieberman earned a B.S. In Journalism from the University of Maryland and further developed his writing skills through courses at Columbia University, NYU and writers workshops. Odd Jobs, Ben’s debut novel, received the Tommy Award for Writing Excellence. Ben currently resides in Chappaqua, NY. “Working in institutional bond trading for several ambitious entities exposed me to a competive and urgent environment. While my novel has nothing to do with finance, I applied the often ruthless nature and created an exciting crime thriller. People who read the novel often ask how much of this is from my own personal experiences. I usually say for sure one thing – I never killed anybody. I leave the rest up to them.”

« Between the Devil and the Deep Blue Eyes
Waiting »