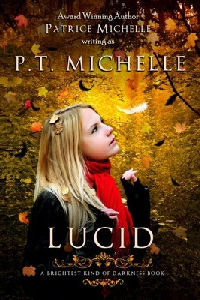 [color-box]Once Nara combines her prophetic ability with Ethan's power to outsmart Fate at his own deadly cat-and-mouse game, she's more determined than ever to help Ethan learn the meaning behind the raven sword tattoo that suddenly appeared on his back after their confrontation with Fate.

During her quest to uncover the tattoo's secrets, Nara enlists the help of some new friends and discovers her own surprising connection to Ethan.

While Nara digs deeper into the mystery, her desire for answers leads her down a dangerous path full of powerful and ruthless enemies. Swept into an age-old battle, Nara quickly learns that keeping one's enemies close can be a necessary evil, making an intangible enemy she can control far more preferable to the human enemies she can't.[/color-box]

Lucid is my favorite of this series so far, even though there is less of Ethan in this installment.  This book was full of action, love, mystery and was a bit of a journey of self-discovery for both Ethan and Nara.

There were a ton of twists that I didn’t see coming, but they really expanded the story line.  There are some new characters in this book and they add a lot to the suspense and mystery of the plot, often in truly unexpected ways.  There were even some times that I was a little less Team Ethan and starting to get on board with Team Drystan!

Lucid digs deeper into the mythology of the Ravens that the author has created for the series and it was fascinating to see it all come together.  There were a lot of secrets held and revealed in this book and there are definitely more questions to be answered in the upcoming third, full-length Destiny.

Things to love about Lucid…

A great series and a great book that leaves me wanting the next NOW!

P.T. Michelle is the young adult pseudonym of Patrice Michelle, author of fifteen romance novels and novellas. When P.T. isn’t writing, she can usually be found reading or taking pictures of landscapes, sunsets and anything beautiful or odd in nature.