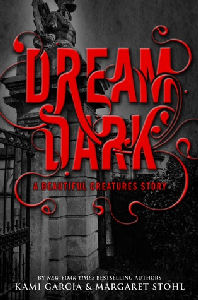 When Link joined his best friend, Ethan Wate, on a quest through a mysterious network of underground passageways endlessly crisscrossing the South, he knew the journey would be dangerous. But returning home to Gatlin, South Carolina was just the beginning...

Wounded during a climactic battle, Link discovers that tending his injuries won't be as simple as visiting a doctor and that healing his arm should be the least of his worries. For being bitten by a Supernatural does more than break the skin -- it changes a person, inside and out, turning Link into someone more and more like the dark creature who injured him.

Dream Dark is a short novella, but an integral part of the Beautiful Creatures series.  This series focuses largely on Link, Ethan’s best friend whom I love.  The forward motion of the series-level plot doesn’t advance too much, the focus being on Link and his story.  But learning about Link was more than sufficient!

Things to love about Dream Dark…

This novella is a link between the first half and the last half of the series and a must read for fans of the series!