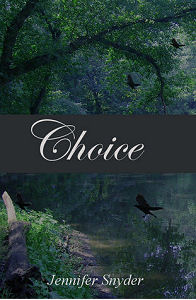 [color-box]Seventeen-year-old Rowan Harper knows her life is forever changed the moment her schizophrenic mother commits suicide. What Rowan doesn’t realize is how much her mother’s choice altered her own fate. It’s not until after meeting Jet, a sapphire-eyed dead boy, Rowan begins to learn of her new destiny as becoming her mother’s replacement for something she never knew existed. Plus a bonus short story-Choice- told from Jet’s perspective! People often say everything happens for a reason. Seventeen-year-old Jet Donavan Mathews is about to find out that statement is not always true. Jet will learn that sometimes there are moments which were never meant to occur, moments where you are left with a choice. [/color-box]

This is a very short read, a bit of back story on Jet, who we met in the first novella of the series, Touch.  I am glad this short was included because it really helped us get to know Jet.  It explained how he came to be what he is and what had happened in his life to make him who he is as we know him now.  It was tragic and sad and it made my feelings for Jet grow by leaps and bounds!  This book gave us some answers to the questions raised in Touch.

A must read for the series, and definitely should be read after Touch.  The events of the first truly add to the emotional pull of the second.  My copy was included in the Kindle file for Touch and you can also buy all three bound together in a single volume, paperback or ebook.