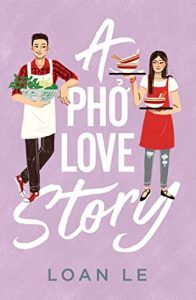 If Bao Nguyen had to describe himself, he’d say he was a rock. Steady and strong, but not particularly interesting. His grades are average, his social status unremarkable. He works at his parents’ pho restaurant, and even there, he is his parents’ fifth favorite employee. Not ideal.
If Linh Mai had to describe herself, she’d say she was a firecracker. Stable when unlit, but full of potential for joy and fire. She loves art and dreams pursuing a career in it. The only problem? Her parents rely on her in ways they’re not willing to admit, including working practically full-time at her family’s pho restaurant.
For years, the Mais and the Nguyens have been at odds, having owned competing, neighboring pho restaurants. Bao and Linh, who’ve avoided each other for most of their lives, both suspect that the feud stems from feelings much deeper than friendly competition.
But then a chance encounter brings Linh and Bao in the same vicinity despite their best efforts and sparks fly, leading them both to wonder what took so long for them to connect. But then, of course, they immediately remember.
Can Linh and Bao find love in the midst of feuding families and complicated histories?
When Dimple Met Rishi meets Ugly Delicious in this funny, smart romantic comedy, in which two Vietnamese-American teens fall in love and must navigate their newfound relationship amid their families’ age-old feud about their competing, neighboring restaurants.

The moment I saw this book as a “coming soon,” I knew I had to have it! In my former life, I was a Vietnamese linguist in the US Army. Once of my teachers, Cô Thảo, showed me a side of Vietnam and its people I’d never known, the Fall of Saigon when I was only four years old. The language, the culture… I fell in love with the beauty of both as a student.

The novel is YA, telling the story of Bao and Linh, born and raised in the United States. Their families fled Vietnam during the war, coming to the US for a new start, a better life. But for as long as Bao and Linh have known of each other, their families have been embroiled in a bitter feud. It’s a modern-day, Vietnamese version of Romeo & Juliet. Only the feud is over competing restaurants. Or so they’ve always thought. Everything began to change the day Bao walked across the street and talked to Linh.

There is so much to love about this novel. For one, it’s an own-voices story, which came through clearly. The Vietnamese culture is very family- and community-centered, as it was in this book. The focus on phở, a major staple in both the culture and the cuisine of the country, was so on point. And it made me yearn for a bowl every time I began to read. For another, it’s so much more than a romance. It talks of the very real trauma caused by the turmoil of the Vietnam war, the struggle of assimilating into a culture that both isn’t one’s own and which hasn’t always been welcoming. Leaving Vietnam didn’t give either family a fresh start, not entirely. Old hurts didn’t stay at the boundaries of their previous home but followed both families over the years. And the racism faced by so many during the first post-war years has never really ended. And now it’s come to Bao and Linh to right the wrongs of the past, to find a way to move forward, for themselves and for the families they so love.

The down side for some might be the plethora of Vietnamese, some of it not translated. This wasn’t an issue for me, as I could read it, but it could be for some. But none of it is so integral to the plot that it would ruin the story to not translate those parts. That would be the only possible down side, in my opinion. There was just so much to love!

This is a must-read book for me! So beautiful, so rich with Vietnamese culture!

Loan Le is the youngest child of two Vietnamese immigrants hailing from Nha Trang. She holds an MFA degree in fiction from Fairfield University, also her undergraduate alma mater. A Pushcart Prize–nominated writer, her short stories have appeared in CRAFT Literary, Mud Season Review, and Angel City Review. Loan is an editor at Simon and Schuster’s Atria Books imprint and lives in Manhattan.