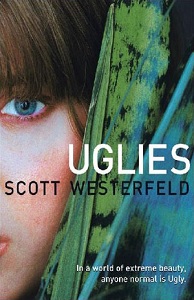 Tally is about to turn sixteen, and she can't wait. In just a few weeks she'll have the operation that will turn her from a repellant ugly into a stunning pretty. And as a pretty, she'll be catapulted into a high-tech paradise where her only job is to have fun.

But Tally's new friend Shay isn't sure she wants to become a pretty. When Shay runs away, Tally learns about a whole new side of the pretty world-- and it isn't very pretty. The authorities offer Tally a choice: find her friend and turn her in, or never turn pretty at all. Tally's choice will change her world forever...

My favorite thing about dystopian fiction is their ability to give me a different perspective on our world, culture, and society.  Dystopian novels push me to really consider the world that we live in and see a little bit of our reality in the dystopian world, to see the potential for what our world could become.  Uglies is one of those novels… one that made me really think about some fundamental issues that are present in our own culture.

Every dystopian world is a the result of a utopian effort to eliminate those things considered to be detrimental to society.  For the world of Uglies, that is nonconformity and extremes.  Set about three hundered years in the future, the world is otherworldly high-tech and the government provides everything to its people, even the extreme cosmetic surgery that is a major part of it’s culture.  At 16, each person receives cosmetic surgery that transforms them from an “ugly” to a “pretty.”  Prior to surgery, each person can choose what their future self will look like within the governmentally mandated standards of beauty.  The lines between ugly and pretty are not just visual, but physical as well.  Once transformed, new pretties cross the river to live in beautiful condominiums where, for the time being, their only job is to be beautiful and to have fun.  Later, they will have other operations in conjunctiuon with the passage of time.  Eventually they will have surgery to turn them into “Middle Pretties,” those who are adults with jobs.  And later they move on to become “Crumblies,” our senior citizens.

Tally Youngblood is the protagonist, about to turn 16 and looking forward toi her operation.  Her best friend Peris has already had his operation and she is feeling the strain that comes between Pretties and Uglies.  Shortly before she has her operation, she meets Shay, another Ugly.  They become fast friends, hoverboarding and pulling the pranks that are a part of Ugly tradition.  Shay is different from anyone she has ever known, balking against the surgery.  Tally ignores that, but is forced to deal with it when Shay runs away just before their shared birthday.  When she goes, she leaves Tally a note with cryptic directions that she doesn’t initially understand.  On the morning of her surgery, Tally is taken instead to Special Circumstances… a paramilitary division of the government that enforces the rules.  There she is given an ulitmatum to give up Shay or never get her surgery to become a Pretty.  This is the motivation behind the plot of the novel as Tally discovers things about herself, about her friends, about the world, and about her own feelings.

This is a character-driven novel with important themes to consider.  The concept of identity is a big part of the storyline.  The government has created and mandated these surgeries in order to create conformity.  Extreme individuality is considered to be a disruptive aspect of past societies, creating a standard of appearance that even removes racial markers.  Beauty is dictated by those standards, a nod to the image-obsessed society that we now live in.  But beauty almost loses its meaning among the Pretties, when everyone is beautiful.  Uglies think of themselves as almost temporary, fUlawed.  After all, they will be “fixed” when they turn 16.  Even the personalities and personal dynamics change when they move from Ugly to Pretty, underlying the idea that we are defined by our appearance.

The characters are well-developed and easily relatable in different ways.  Because of the wide range of characters along the Ugly-Pretty spectrum, there were lots of perspectives and thoughts about the world.  Some of the characters made you really think about the choices you might make for yiourself if in their position.  There are undoubtedly things that are tempting about the Pretty part of society, but at the same time, the implications are frightening.  And there are just as many things that are tempting about remaining Ugly (our own reality), as well as the sacrifices.

This is a fantastic example of dystopian literature, a world with both utopian and dystopian elements.  The implications of a world like the one in this book are a little scary, particularly when compared to the world and culture we live in today.  Fantastic read that will make you think!