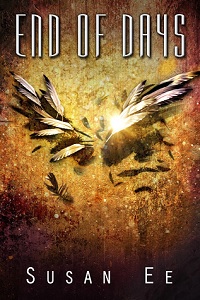 End of Days is the explosive conclusion to Susan Ee’s bestselling Penryn & the End of Days trilogy.

After a daring escape from the angels, Penryn and Raffe are on the run. They’re both desperate to find a doctor who can reverse the twisted changes inflicted by the angels on Raffe and Penryn’s sister. As they set off in search of answers, a startling revelation about Raffe’s past unleashes dark forces that threaten them all.

When the angels release an apocalyptic nightmare onto humans, both sides are set on a path toward war. As unlikely alliances form and strategies shift, who will emerge victorious? Forced to pick sides in the fight for control of the earthly realm, Raffe and Penryn must choose: Their own kind, or each other?

End of Days is the final book in this amazing series, and I am sad to see it end, so much so that now I have my son reading it so we can talk about it!!  The conclusion was everything I wanted it to be.

It begins just after World After ends and so much has happened that it is hard toi remember that only about two weeks have passed since the beginning of Angelfall.  The character development in this series is pretty intense.  Penryn has no concept of anything superficial, no idea of her own looks.  And I love that those things aren’t even on her radar.  Instead, she is fully focused on her mission, her family, and those she cares about.  In this book, she is not just strong, but straight up badass.  She fights not just for herself and for her own, but the people who need her.  And then there is Raffe.  He has always been true to his angelic ways and rules, but fully capable of thinking independently and standing up when wrong is being done, even if it is against his own.  He, like Penryn, is a fighter for his own.  And this often puts the two of them at odds with one another and herein lies our romantic tension.

One of the things that I love most about this book, and the series as a whole, is that the post-apocalyptic themes have been the focus of the main plot.  The romantic aspect is powerful and beautiful, but subtle.  Not only did I appreciate the idea that perhaps other things should be the main focus, but I found that it added so much anticipation to that part of the story.  That being said, the romance was much more intense in this book and it fed that girlie part of my heart.  Against all odds, they have come to see each other less as angel and human, but as equals.  Despite Raffe’s otherworldly abilities, there are still things that Penryn can do that he cannot and that works for them.

I truly loved this series!  I love the unique use of angels in the story line.  I loved the characters.  I loved the twists and turns.  I loved the themes woven throughout the novel.  This entire series is one that I highly recommend! 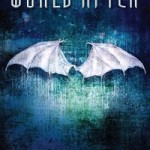