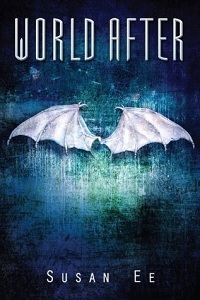 In this sequel to the bestselling fantasy thriller, Angelfall, the survivors of the angel apocalypse begin to scrape back together what's left of the modern world.

When a group of people capture Penryn's sister Paige, thinking she's a monster, the situation ends in a massacre. Paige disappears. Humans are terrified. Mom is heartbroken.

Penryn drives through the streets of San Francisco looking for Paige. Why are the streets so empty? Where is everybody? Her search leads her into the heart of the angels' secret plans where she catches a glimpse of their motivations, and learns the horrifying extent to which the angels are willing to go.

Meanwhile, Raffe hunts for his wings. Without them, he can't rejoin the angels, can't take his rightful place as one of their leaders. When faced with recapturing his wings or helping Penryn survive, which will he choose?

I love that this series uses angels less as a symbol of traditional religious mythology, but more as supernatural creatures with their own motivations.  And in this book, we get a lot of answers to questions from the first book, but also have all kinds of new questions.  It isn’t quite as action-packed as the first novel, but it is a powerful story nonetheless.

Penryn is such a fantastic female lead character.  She is courageous and willing to do whatever it takes to save her sister, brave enough to take on anything and everything by herself if need be.  The world is falling apart around her, but her determination to protect those she loves is her sole focus.  And Raffe… moody and surly, but he is clearly the most noble of the angels.  And he is surprisingly funny in a dry sort of way.  I think that side of his character is a bit unexpected, given how intense he is portrayed to be.

This is a post-apocolyptic novel set in a world of chaos.  It has all the makings of an intense read, with the various subplots that weave together to form this great novel.  There are some emotionally charged themes and many of the characters have rather intense stories of their own.  But there are some amazingly funny moments that bring a lot of life to the entire story.  It is those moments that give the reader hope for the future of the world in these books and I love that side of humanity!  There are some fantastic bits of dialogue that had me laughing out loud during an otherwise intense and serious read.

If you like angel/human paranormal reads, then I highly recommend this one.  The characters are tight and the storylines are engrossing!