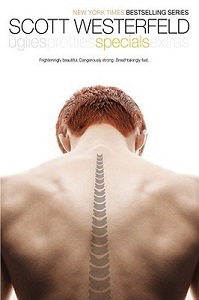 "Special Circumstances": The words have sent chills down Tally's spine since her days as a repellent, rebellious ugly. Back then Specials were a sinister rumor -- frighteningly beautiful, dangerously strong, breathtakingly fast. Ordinary pretties might live their whole lives without meeting a Special. But Tally's never been ordinary.

And now she's been turned into one of them: a superamped fighting machine, engineered to keep the uglies down and the pretties stupid.

The strength, the speed, and the clarity and focus of her thinking feel better than anything Tally can remember. Most of the time. One tiny corner of her heart still remembers something more.

Still, it's easy to tune that out -- until Tally's offered a chance to stamp out the rebels of the New Smoke permanently. It all comes down to one last choice: listen to that tiny, faint heartbeat, or carry out the mission she's programmed to complete. Either way, Tally's world will never be the same.

I have such mixed emotions about this book.  It was originally supposed to be the final book in a trilogy, although there is now a fourth book in which Tally appears as a non-central character.  So, even though this ended up not being the final book, it is really the final book in which Tally is forefront.  Because of that, the ending felt a little unfinished for what was in essence the end of her story.  But then again, those imperfect endings are a reality of life.

Tally was also a lot less likeable in this book.  This is not because of a lack of character development, but rather the fact that her character has undergone some extreme changes within her story arc.  Her character has changed so much across the course of the three books to date.  In the first, she was an Ugly, full of humanity as we know it.  In Pretties, she was changed into a Pretty and her personality changed with it.  Even when things changed for her, her personality was never really as it had once been.  And now, as a Special, she is nothing as she once was.  Her humanity is almost entirely gone, more cyborg than human.

The plot was extremely action-packed and there were some fantastic twists and turns throughout the story.  Like the other books, there was romance, but it wasn’t the central focus of the plot.  That is something that I generally appreciate, although even I hoped for a little more.  But I suppose romance is difficult when one has virtually no humanity.

The one thing that drove me insane for most of the novels was some of the vernacular.  Emotion words are changed a bit and the style was fairly annoying at first, until I realized the reasons for that linguistic twist.  Emotions are expressed as “bubbly” or “happy-making” or “fear-making.”  Even among the Pretties, emotions are less inherent and more manufactured.  There is a distance between the Pretties and truly feeling emotion and the language really supports that.

Despite my misgivings about the ending, it is still an engaging read.  One of the things I love most about these novels is that the author doesn ‘t neatly tie everything up into happily ever afters.  There might be happiness or resolutions, but they aren’t complete.  There is still failure, destruction, death, disappointment, and loss.  Life never has a perfectly happy ending and the author isn’t afraid of showing that.  Bittersweet emotions are a fact of life. 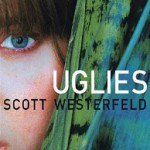