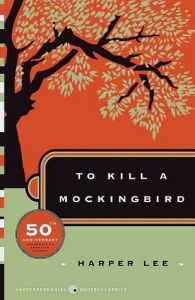 The unforgettable novel of a childhood in a sleepy Southern town and the crisis of conscience that rocked it, To Kill A Mockingbird became both an instant bestseller and a critical success when it was first published in 1960. It went on to win the Pulitzer Prize in 1961 and was later made into an Academy Award-winning film, also a classic.

Compassionate, dramatic, and deeply moving, To Kill A Mockingbird takes readers to the roots of human behavior—to innocence and experience, kindness and cruelty, love and hatred, humor and pathos. Now with over 18 million copies in print and translated into forty languages, this regional story by a young Alabama woman claims universal appeal. Harper Lee always considered her book to be a simple love story. Today it is regarded as a masterpiece of American literature.

This is a book that I have read and reread several times.  My mother, who recently passed away, taught this book for years as a high school English teacher and it was her favorite novel.  So when the publishers sponsored a read-along of the novel, I took part with a close friend who was also a former student of my mother’s.

There is no question that this novel is the epitome of the “Great American Novel,” beloved by so many.  The social issues contained within its pages are important.  They were important during the time of the novel’s story, and they are important today.  Yet, while I appreciate all of the things about this novel that have given it the prominence it has within American literature, it has never been one of my favorites.

In part, this is because of the characters.  One one hand, I enjoy that the characters, although many are rather disagreeable, are representative of people we all know.  They were developed as real people, flaws and all.  But on the other hand, I feel like many of the characters are rather flat.  Calpurnia was the black maid who accepts that her race dictates her place in life.  Tom is the innocent black man accused of wrongdoing.  Jem is the boy caught between childhood and adulthood.  Scout is the precocious little girl.  Boo is the mysterious eccentric who turns out to be kindly.  Attitcus is the good father who fights for justice.  There are the prerequisite racists.  All of these are surface characterizations and there just didn’t seem to much depth beyond fitting the characters into almost archetypal roles.  But this is a matter of personal taste, I think.  I simply enjoy more character-driven stories.

Harper Lee, known as Nelle, was born in the Alabama town of Monroeville, the youngest of four children of Amasa Coleman Lee and Frances Cunningham Finch Lee. Her father, a former newspaper editor and proprietor, was a lawyer who served on the state legislature from 1926 to 1938. As a child, Lee was a tomboy and a precocious reader, and enjoyed the friendship of her schoolmate and neighbor, the young Truman Capote.

After graduating from high school in Monroeville, Lee enrolled at the all-female Huntingdon College in Montgomery (1944-45), and then pursued a law degree at the University of Alabama (1945-50), pledging the Chi Omega sorority. While there, she wrote for several student publications and spent a year as editor of the campus humor magazine, “Ramma-Jamma”. Though she did not complete the law degree, she studied for a summer in Oxford, England, before moving to New York in 1950, where she worked as a reservation clerk with Eastern Air Lines and BOAC.

Lee continued as a reservation clerk until the late 50s, when she devoted herself to writing. She lived a frugal life, traveling between her cold-water-only apartment in New York to her family home in Alabama to care for her father.

Having written several long stories, Harper Lee located an agent in November 1956. The following month at the East 50th townhouse of her friends Michael Brown and Joy Williams Brown, she received a gift of a year’s wages with a note: “You have one year off from your job to write whatever you please. Merry Christmas.”

Within a year, she had a first draft. Working with J. B. Lippincott & Co. editor Tay Hohoff, she completed To Kill a Mockingbird in the summer of 1959. Published July 11, 1960, the novel was an immediate bestseller and won great critical acclaim, including the Pulitzer Prize for Fiction in 1961. It remains a bestseller with more than 30 million copies in print. In 1999, it was voted “Best Novel of the Century” in a poll by the Library Journal.