In this second installment of the Family Spies series, set in the bestselling world of Valdemar, the children of Heralds Mags and Amily must follow in their parents' footsteps to protect the realm.
Mags, Herald Spy of Valdemar, and his wife, Amily, the King’s Own Herald, are happily married with three kids. Their daughter, Abidela, dreams of building upon her parents’ legacy by joining the Artificers, hoping to offset her seeming lack of a Gift.

But when Abi senses the imminent collapse of a bridge only moments before it happens, she saves countless lives, including that of her best friend, Princess Katiana. The experience, though harrowing, uncovers her unique Gift—an ability to sense the physical strains in objects.

Intrigued by the potential of her Gift, the Artificers seek to claim her as their own—but so do the Healers. Through training with both of them, Abi discovers unique facets of her Gift, including a synesthetic connection to objects that allows her to “see” as well as feel the strains.

Her Gift may also grant her a distinct advantage as a spy—there won’t be a building in the entire kingdom of Valdemar with a secret room that she doesn’t know about. With the help of her mentors, she must hone her gift to uncover the hidden secrets in the depths of Valdemar.

One of the best parts of the Valedemar books is that the stories build upon a rich cast of characters that are referenced through out the saga, allowing for a lot of in-depth character development. In this book, Abi (the middle child of Mags and Amily, first seen in The Collegium Chronicles series prior to this trilogy) is the focus. The daughter of two Heralds, she’s trying to find her own place in the world, her own calling.

Another thing I love about this overall saga is the diverse representation… in sexuality, gender, and race. Abi is portrayed as aromantic, asexual, which I appreciated. I love all of the books of Valdemar. Part of that is the fantasy aspect, of course. But it’s also because the stories revolve around so much more than romantic relationships between characters. It’s about the quest for good over evil, the struggles with morality.

If you love a great fantasy with exquisite world-building, Mercedes Lackey is a genius at delivering both of these things. 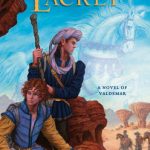