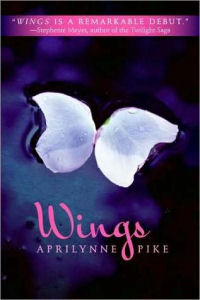 Laurel was mesmerized, staring at the pale things with wide eyes. They were terrifyingly beautiful—too beautiful for words.

Laurel turned to the mirror again, her eyes on the hovering petals that floated beside her head. They looked almost like wings.

In this extraordinary tale of magic and intrigue, romance and danger, everything you thought you knew about faeries will be changed forever.

I came across this series when it appeared on my reading class for a literature class called Women of Faerie.  I love all things magical and fae so I was excited to read this series.

From a technical standpoint, this book was written from the point of view of a narrator, something that I see less and less of in YA literature.  I generally like first-person stories better because I feel like I get the main character better, but this really worked for this story line and the characters involved in it.

The faery mythology in this book was different than most of what I have read before, these faeries very different from the traditional winged creatures we are used to in literature.  Instead, these faeries really tied in the concept of nature by being less humanoid and more plant-based.  With that, a faery’s appearance changed in accordance with the kinds of food they, as in their hair and eye colors.  I loved that little detail!  Also interesting is the fact that their “wings” had a real purpose beyond being pretty or for movement.  All of these things created an interesting and refreshingly different world.

The characters in this book were fantastic.  Laurel is our main characters and is seemingly your typical teenage girl.  She is the new girl, in public school for the first time in her life.  She is beautiful and she knows it without being stuck on it, slim with blonde hair and green eyes.  Instead, she is feeling shy and out of her comfort zone when we first meet her.  She has been homeschooled until now, living in a tiny town, giving her a complete lack of social interaction with kids her age. That awkwardness makes her real.  I loved her loyalty to her friends, even despite all she learns about her history as a faerie.  She doesn’t forget them when she discovers the truth about herself.  Her “back and forth” between Tamani and David sometimes bothered me, even though I understood it and it was essential to the story line.  David is fascinating in that his character accepts Laurel with very little hesitation, perhaps even before she accepts herself.  He is highly intelligent and very much a scientific mind which I think helped him accept her.  Tamani is interesting because he is rather otherworldly.  He is fae, like Laurel, and has lived in the human world just about as long as she has.  But they are very different people despite this.  She was raised in the human world, living with the ideals and ways of humans.  Tamani, even though he technically lived in the human world, lived apart from it.  He understood human ways on the surface, but always came across as aloof from human ways.

This was way more than some strange manifestation of puberty. Mood swings, disfiguring acne, even periods that went on for months were at least semi-normal. But growing oversized flower petals out of your back from a zit the size of a softball? This was something else entirely (49).

Her lips filled with the sweetness of his mouth, and Tamani held her against him as if he could somehow pull her inside of him, make her part of him.  And for a moment, she did feel like part of him. As if their kiss bridged the gap between two worlds, even if only for that one brief, sparkling moment (289).

A fantastic read for anyone charmed by fae lore, Avalon, and the epic struggle between good vs. evil.