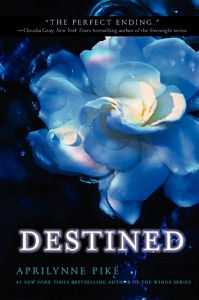 Tamani looked at her gravely, and reached up to tuck her hair behind her ear.

He hesitated for an instant, then his hands found the sides of her face, pulling her to him. He didn't kiss her, just held her face close to his, their foreheads resting together, their noses almost touching.

Laurel now knows the truth: Yuki is a rare Winter faerie, the most powerful and deadly of all, and Klea plans to use her to help conquer and destroy Avalon. But Klea's reach extends far beyond one wild Winter faerie. With Tamani, David, and Chelsea by her side, Laurel prepares to face what may be Avalon's final days, in the stunning conclusion to the Wings series.

Laurel, as always, is a fabulous main character.  I love that, although she is fae, she has retained her humanity and has tried to embrace both sides of her life.  But in her quest to save those she loves, both human and faerie alike, Laurel can often be more than a little reckless.  She is quick to react and to act, but not always with as much thought as maybe she should have.  But her selflessness is endearing, even if she is often too self-sacrificing.  I like that, as a character, she is written to be imperfect, which makes her character one that is easy to love and to cheer for.

What I find most interesting about her as a character is the type of person she has been created to be.  She really doesn’t fit anywhere, not fully.  She was raised as a human, not knowing her own heritage as a faerie.  She has human ideals and her ways of thinking are fully rooted in the human world.  But there is no escaping the fact that she is not human, but faerie.  There is so much about her that is completely different from humanity, not the least of which is her very anatomy.  These things set her apart from her human friends and family in fundamental ways.  But nor does Laurel fully fit into the faerie world.  She hasn’t grown up living within the faerie ways, and doesn’t remember her early childhood in Avalon.  Many of the faerie traditions and ideals seem wrong to her because she wasn’t raised within them.  As a result, Laurel isn’t just alien in the human world as a faerie, but in the faerie world with her human ways.  Pretty clear commentary on the life of a teenager, or anyone!

David was a star in this book, as was Chelsea, too.  David took on a fight that wasn’t necessarily his own, the fight to save Avalon.  Considering he had lost his beloved Laurel to Tamani, there was no reasonable expectation that he take that on.  But he put aside his ego and his feelings and stepped forward to be the hero Avalon needed.  On the flip side, there was the Queen.  I couldn’t stand her, which was appropriate for the story line.  She was supposed to be the extremely powerful Winter faerie Queen and she seemed to be more concerned with her own power than those who she was supposed to be leading.

The ending (no spoilers!) was done in a really creative and interesting  way.  It was not the traditional, “happy ever after” ending that I was expecting.  There is a certain expectation for a neatly tied-up ending, especially in a faery tale.  While it wasn’t a bad ending, it wasn’t at all what would fit that faery tale formula, more bittersweet than sweet.  It was terribly beautiful in some ways and terribly heartbreaking in other ways.  I came into the ending expecting it to follow that formula, but after experiencing it, no other ending would have been as emotionally right for the series.  It could have ended at the end of the final chapter, with a perfectly acceptable ending.  But immediately after that, Pike inserts a note to the reader, a note that brings the reader into the mind of the author and subsequently into the mind of David.  The note explains that there is more to the end of the story, an end that is not so “HEA” but more human.  In other words, more realistic and more imperfect.  This ending is written in the form of a letter and was beautiful, and terribly sad in so many ways.  Thoroughly emotional and full of its own magic.

Sleep wasn’t an option, not while the only thing between him and an angry Winter faerie was a thin line of table salt (7).

“Never underestimate the power of a situation you put yourself into (23).”

“No person’s life should be defined by a single purpose, especially one they didn’t choose (246).”

The best, most lasting changes are those which come about gradually; to reach great heights, a tree must first put down extensive roots (331).

I am sad to see this series end and can only hope for a companion series in the future!  A must read! 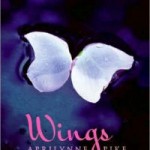