Killing Kennedy was only the beginning
The shadow government has been pulling the strings since the sixties. Now they have a plan to deal with global warming, a plan with only one goal: To save themselves.

When tabloid editor Jack Crowley stumbles onto the plan, the body count skyrockets. Now D.C. cop Jim Patterson is interested, but neither man knows who to trust.

From Washington to Las Vegas to the Middle East, they manage to stay one step ahead of their pursuers in a race to expose the truth. Because the price of failure may be more than anyone on the planet can pay.

Pick up the thrills today!

New World Orders is the first novel from the writing duo, a science fiction meets political intrigue meets possible alternative history and future.  This book was really more of an epic tale as it spanned decades, using real events in history but alternate explanations for those events.  As with Alive From New York, conspiracy theories were often used as integral parts of the story, providing a whole new twist to events in history.  One of the things I like most about this book was that the heroes weren’t always who you assumed they were going to be.  There is a certain formula to most books in that the heroes always survive, always win, and good always wins out.  There were many times throughout the book that this wasn’t necessarily true and that made for a far more interesting read.

Real characters mixed with ficticious characters to create a story of intrigue, suspense, and nonstop action.  Real characters were placed in the context of true events but a back story was often created for them that changed the entire meaning of the events in which they were involved.  Conspiracy theories usually annoy me, my personal feeling being that they often create more fear and division than is necessary.  But using them in the framework of a novel like this was fascinating and frequently thought-provoking.

I definately recommend picking this book up and giving it a read! 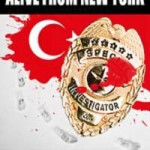