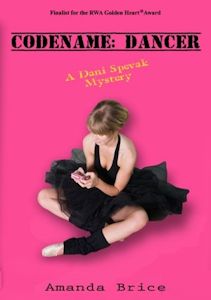 Aspiring ballerina Dani Spevak is thrilled when hit TV show Teen Celebrity Dance Off comes to the campus of her performing arts boarding school. She trades the barre for the ballroom and gets set to cha-cha-cha to stardom with Hollywood wonderboy Nick Galliano.

At first their partnership is awkward, because Dani is in awe of her longtime teen idol crush. But soon their chemistry is heating up the dance floor and the attraction moves into real life.

Her excitement is short-lived, because someone wants her off the show. Bombs, poisoning, arson… Will Dani’s 15 minutes of fame be over before she reaches age 15? Dani and her friends are suddenly at the center of some serious sabotage. And if she doesn’t find out who is behind it, her next pirouette could be her last.

Codename:  Dancer is the debut YA novel by author Amanda Brice, and the first in a series centering around aspiring dancer Dani Spevak,  Being a lover of all things dance-related, I was delighted to read a book centered around the dance world.  Dani is a high school freshman, and a new student at a performing arts boarding school in Arizona.  Initially excited to have been selected as a dancer on a reality show, things change for her quickly as things begin to go wrong, usually with her at it’s center.  The action and suspense were nonstop from the beginning of the book as Dani and her friends tried to figure out who was behind the sabotage.  Although I think the book is geared to younger teens, the story is a good one, and definately keeps your attention with its twists and turns.  The author captured the mood and character of the age very well, even touching on some more serious issues that a lot of girls today face. I definately recommend this book, and the series, to high school age or a little younger.  The next book in the series, Pointe of No Return, comes out in November 2011.

As a little girl, Amanda Brice dreamed of being either a ballerina or the author of a mystery series featuring a cool crime-solving chick named Nancy Flew, but her father urged her to “do something practical,” so she went to law school and spent her days writing briefs and pleadings instead of fiction.

But dance and writing have remained a part of her life. Amanda was a member of the ballroom dance team at Duke University, and continues this interest by her obsession with Dancing with the Stars, so it was only natural for her to set a teen mystery series at a dance school.

Amanda is the President of Washington Romance Writers, and is a two-time finalist for Romance Writers of America’s prestigious Golden Heart® Award. She blogs once a month or so with the Ruby-Slippered Sisterhood. She is also a popular conference presenter, speaking on basic copyright and trademark law for writers.

In her spare time, Amanda enjoys dancing, reading, cooking, traveling, and obsessing over whether Duke will beat Carolina in basketball. Go Devils!