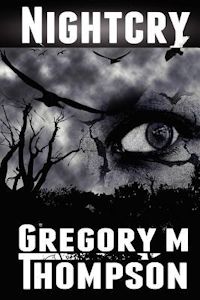 Set in the present in a Midwestern small town, Nightcry is about Grant Sykes, who has returned to his hometown of Ilton to run the local paper. Soon, people start to die and fingers point to him--it doesn't help the evidence continues to amass against Grant. He thinks the deaths may have something to do with a supernatural being that killed his parents years ago, but the local Police Chief has other theories. Grant recruits the help of a ghosthunter to investigate the suspected banshee while Grant figures out means to prove his innocence.

The premise of Nightcry was a creative and imaginative one, suspense and horror combined with a supernatural element.  The suspense begins with the opening scene and continues to grow throughout the story, with lots of twists along the way.  As the story progresses, the fact that Grant himself could be the guilty party gave the story an edgy feeling.  The author interjects Grant’s somewhat disjointed, and sometimes inappropriate, thoughts in the midst of the text.  While distracting, it is purposely so, heightening the idea that perhaps Grant is questioning his one involvement in the deaths.  There is also a lot of backstory throughout the book, shared in the form of recollections from both Grant and Mavis, that explained some things from both of their pasts.  I finished the book unsure, however, of what connection (if any) there was between Mavis’ memories and the story at hand.

Grant was the center of the story, and I am not really sure how I felt about him is a character.  As a character, he seemed to be a bit immature and a little emotionally stunted, although the latter could be explained by the backstories of his past.  There were times when I was drawn to him and really felt for him as a character, but there were other times when I didn’t really care about him one way or another.  I think that as a reader, we never really got to know him as a person beyond the scope of the events of the moment.

I loved the ending in that it was completely unexpected, although I wish that a little more of the “why’s” were answered.  I don’t want to spoil the ending, but I wish the reason the bad guy gave was more fully explored.  The epilogue did a good job of wrapping up the more practical loose ends to the story, but I wish it had answered my “why’s” and maybe tied together the backstories a little more for me.

My only real issue with this book was the sheer amount of errors.  There were a lot of grammatical errors, and there were places where entire words omitted and at times those omissions completely changed the meaning of the sentence or paragraph.  There were also places where random words appeared to have been placed within a sentence, words that seemed like maybe they were supposed to be corrections of misspelled words on spell-check, but were actually the wrong word.  Most of the time, I try to overlook this sort of thing, but it really did affect the ability to read this book.  I have the recently released second edition.  In spite of that, the bones of the story were excellent and better editing could only enhance that.

Gregory M. Thompson is a Science Fiction/Fantasy/Horror writer with publishing credits in Macabre Realms, Digizine, Aphelion Webzine, Concisely, Digital Dragon Magazine, Dark Gothic Resurrected, Midwest Literary Review, Roar and Thunder, The Fringe Magazine and more. He also has an award-nominated science fiction piece in the collection, Steampunk Anthology, published by Sonar4 Publications and has a horror/western story called “Cora” in the anthology, Welcome to Hell: an Anthology of Western Weirdness, edited by Eric S. Brown. Nightcry and The Golden Door are two of his novels, released in March and June 2011 respectively.