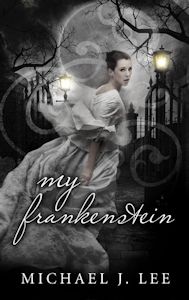 In a small village in early 19th Century young Eva is enthralled by the new young baron, Viktor Frankenstein. Viktor promises to transform the traditional little town into a beacon of science and gives the book loving Eva access to his fantastic library. Eva becomes his student and assists him in a secret experiment, though she is kept in the dark about its ultimate aim. Soon after that Viktor introduces Eva to his “cousin” Adam. Adam is horribly disfigured with stitches running across his face. Viktor claims he is mute and simpleminded, but Eva takes pity on him and sets out to teach him to speak.

My Frankenstein is the debut fantasy novel from Michael Lee, and it is an excellent beginning.  I have read the original Mary Shelley version, and while classically good, I was never really that into the story. I most definately enjoyed Lee’s retelling of the story.  The overtones of steampunk and romance were perfect for the gothic storyline and I really enjoyed it!  I was engrossed from the moment I began reading, the plot dragging you in and keeping you there.

In my opinion, this was a very character-driven novel, and these characters were so rich and textured that they made the story.  Eva is a strong, intelligent young woman who wants more for herself and her village than to continue on in the neverending traditions without change.  When she meets the baron, Viktor, he represents all the things she thinks she wants as he talks about his grand plans for the sleepy, little village.  Eva becomes his willing student and staunchest supporter, swept away by his attention and newness.  To me, in the original tale, Igor was almost a non-character, completely unrelatable to me as a person. In My Frankenstein, he was given life and personality as he was torn between loyalty to Viktor and concern for Eva.  Viktor was ever changing in his personality, at times the dashing baron and at others, the dark, almost evil man with a mysterious plot.  All of the characters, while vastly different, made for an extremely rich tale. And, while not necessarily integral to the story, the cover art is stunning! I highly recommend picking this novel up and giving it a read!

Born in Detroit, lived on the East Coast, the West Coast and the Midwest.

I’ve been a script reader and judge and I’m not a script consultant and entertainment blogger. I’m a frequent contributor to Screenwriting University.

I’m an avid fan of military history and cooking. So George R. R. Martin’s Song of Fire and Ice hits me in two sweet spots.

I’m currently working on a second edition of My Frankenstein and my new Dystopian thriller. I’m also collaborating on a fun YA series with the wonderful Tawny Stokes.

One thing I love about writing is that you have to be a constant student. There’s always something new to learn.

3 responses to “My Frankenstein”