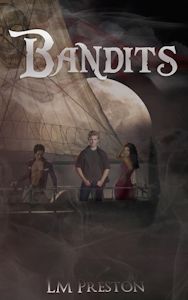 I am not generally a huge science fiction fan, but Bandits had me thoroughly engrossed from the very beginning.  Set mainly on a planet populated by futuristic pirates and killers, it was a unique twist on the traditional high seas pirate tales I have read.  The planet Merwin is a planet unlike anything we Earthlings could ever know.  There is technology of which we know nothing, creatures unlike anything we could know, and an environment completely unlike our own home planet.  Yet the author somehow makes it all completely relatable.

Some of that is probably due to her skill in creating wonderful, full of life characters.  With them, the author is able to fully transport you to a world so very different from our own, and change your thinking to accept the things we wouldn’t accept in our own world.  For example, on the surface, Daniel is an unlikely hero to fully relate to, with a lifestyle completely at odds with what we know as socially acceptable.  He has been trained since a very young age to be a pirate, fully capable of killing to get the coveted treasure.  But set in the world that he is, that is a perfectly acceptable way of life.  All of the core group of characters (Jade, Faulk, Gabe, Nick, and Daniel) are very unique in their personalities, and together they make for a very rich story.

My main reason for not loving science fiction is that generally, I just can’t vividly picture the unknown worlds in my mind.  I most definately didn’t have this problem with this book.  Preston’s descriptions were so well done that I had perfect graphic images of the creatures, of the environment, of everything.  That brought me into the story in a way that science fiction rarely does for me. I highly recommend picking this up and giving it a read!

LM. Preston was born and raised in Washington, DC. An avid reader, she loved to create poetry and short-stories as a young girl. With a thirst for knowledge she attended college at Bowie State University, and worked in the IT field as a Techie and Educator for over sixteen years. She started writing science fiction under the encouragement of her husband who was a Sci-Fi buff and her four kids. Her first published novel, Explorer X – Alpha was the beginning of her obsessive desire to write and create stories of young people who overcome unbelievable odds. She loves to write while on the porch watching her kids play or when she is traveling, which is another passion that encouraged her writing.

« Elves in the Meadow, Trolls in the Corn
My Frankenstein »