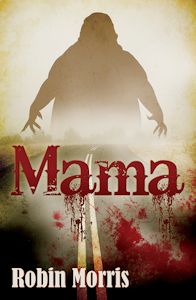 Mama has found the Conovers and is using them as a lesson for her children.

Mama is the epitome of a thriller, with lots of twists and turns, monsters, and a healthy amount of gore!  While primarily a horror novel, there was also the underlying story of a family and their struggles in life.  Both stories worked hand in hand and each made the other better and more complex.  The action was non-stop, and so was the creepy factor!  Mama and her children were very unique villians, and absolutely make me want to rethink any possible road trips in my future.

I think the characters made this story for me, as much as the plot.  The Conover family is headed back to Illinois after Jeff’s career as an actor has hit a dead end.  His wife Lee, although she won’t admit it to her husband, is more than happy to not live the Hollywood life.  Alison is your typical angry teen, furious at what she sees as her father’s failure and how it is “ruining” her life.  Of all of them, 9 year old Michael was my favorite character.  He was sweet and smart and just a lovable kid.  Mama and her family, even though the villians of the story, were relatable in their own way.  Mama came from a different world, a world in which you had to be hard and cruel to survive.  In her own way, she was trying to teach her own children an important lesson.  I never thought I would find a murderous villian a sympathetic character, but there were definately shreds of humanity with Mama and her kids.

I think this was a very unique twist on horror, with a very engaging plot.  I wouldn’t recommend it for the under 17 crowd necessarily because of the level of gore, but I definately recommend it for those who love a good, creepy read!

Robin Morris is the author of Mama and Halloween Sky and Other Nightmares. She lives close enough to Los Angeles to breathe the smog but not close enough to ever see any celebrities.