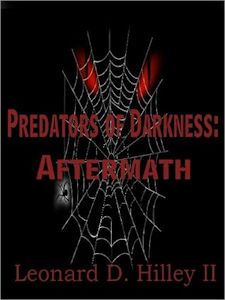 Fear What Lurks In The Shadows

The desolate streets of downtown Pittsburgh in 2073 are a reminder of the missile attack that forever changed the lives of the surviving scientists and students hidden in the fallout shelter of Helmsby's Genetic Research Center. Believing themselves to be the only survivors, they station themselves inside the center until food supplies near depletion. Thinking the fallout has lessened, they emerge three years later to discover strange creatures patrolling the streets in search of human flesh and blood. The creatures possess the ability to shift their genomes and alter their appearances by realigning their genetic sequences. Daniel Hutchinson, their leader, teams with Lucas Ridale and together they set out to scavenge the area for food and supplies with the hope to find other survivors. But Daniel's most recent journey uncovers mysteries more frightening than the shifters. He discovers the tip of Pittsburgh has been fenced off from the rest of the area. Low-flying helicopters observe the streets, making him ponder the question: Were the shifters released as simply part of a military experiment with humans being their prey?

Predators of Darkness:  Aftermath is a book that made me not want to leave my house!  The opening line below had me hooked from the very beginning,…

Dropping a cat from the top ledge of a ten-story office building was not the best way to remain hidden, but it was necessary.

Not your everyday start to a novel and it had me wanting more.  After a missile attack on the city, a group survivors have lived in the well-prepared fallout shelter of a genetic research center, not leaving it for three years.  When they finally do emerge, the world as they know it is gone.  Being in the streets for even a moment is a dangerous mission that many do not survive.  The survivors have organized themselves into a new society, with new rules and regulations to try to save the human race from extinction.  Only a very few are allowed to leave the building and face the breed of shape-shifting killers that now roam the streets.

The sheer terror the author created in the dystopian Pittsburgh of 2073 was absolutely chilling.  From the fog, mist, and darkness of the streets to the red eyes and growls of the shifters prowling,… the environment was eerie, creepy, and downright scary.  The descriptions were well done, more than capable of creating the physical scene without overloading the story with endless imagery.  The characters, too, were extremely well done.  All of them were entirely believeable, even if not all of them were truly likeable.  There was definately some aspects to the story that could seem, on the surface, as a bit misogynistic, including some questionable sexy scenes.  But, in my opinion, that really wasn’t the case.  Society within the research center had been reformed at it’s most primitive level and women, right or wrong, were needed to assure the continuation of humanity and were therefore far more protected.  It was more of a necessary aspect to the survival of human beings than a sexist thing.

This was a story that grabbed me and held on to me.  It was deliciously scary and, as in the best of dystopian fiction, it was entirely believable as a possibility.  I highly recommend picking this up.  The following two, in order, are Beyond the Darkness and The Game of Pawns, both available now.

Leonard D. Hilley II is a native of Ohio. Born in Middletown in 1966, his family moved to Alabama when he was six months old. At the age of three he was reading books. By age eleven he wrote his first novel.

Leonard spent most of his youth exploring the bluffs, meadows, and woods in the Pleasant Hill community near Fort Payne, Alabama. When he was ten years old, he viewed Dr. McKabe’s insect collection and immediately his love for biology was birthed. He collected and reared butterflies and moths for many years.

Leonard currently lives in the mountains of Kentucky with his wife and two children where he is busily working on more novels, a screenplay, and a children’s picture book.