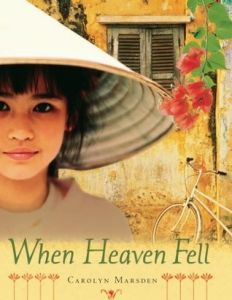 When a Vietnamese girl receives a visit from her half-American aunt, brimming curiosity — and cultural misperceptions — come to the fore.

Every day nine-year-old Binh sells fruit and sodas to the girls whose families can afford to send them to school, and every night she returns to her one-room home to share a simple meal with her family. Everything changes, however, when her grandmother tells Binh she had a daughter during the war, a child who was sent away to America as a little girl. Now Di Hai — Binh’s aunt, a teacher — is coming to visit, and Binh can’t help but wonder what luxurious gifts she will bring.

Yet when Di Hai arrives, there are so many confusing things about her: she’s taller than the men, she’s not married, and her presents are mere trinkets that could have come from Third Aunt’s tourist shop! Still, Binh secretly hopes Di Hai will take her to live in America. Can her aunt live up to her expectations? Carolyn Marsden tells Binh’s story with warmth and sensitivity as she ushers readers into the life and dreams of a young Vietnamese girl.

I picked up this book as part of an independent reading assignment for a children’s literature assignment on multiculturalism.  I loved it so much I wanted to share it here.

A full disclaimer… in my previous life, I was a Vietnamese linguist in the US Army.  Because of that, I fell in love with all things Vietnamese culture, a big reason I chose this novel.  The messages of this book are both eye-opening and beautiful, and it truly shows the differences and assumptions that are often made about different cultures.

It is set in relatively contemporary times in Vietnam.  Binh is 9 years old and has spent her entire life in her village, never even seeing her own country.  She lives with her parents, her brother, and her grandmother in a tiny one-room home nestled next to the river.  Her days are spent by the highway, selling fruit and soda to passersby.  Although school is free in communist Vietnam, the uniforms and books are not and her family cannot afford to send her to school.  A little cost comparison… school costs approximately 600,000 dong in southern Vietnam, which today is equivalent to about $28.

Ba Ngoai, Binh’s grandmother, finds out that her long-lost daughter Thao is coming to visit her.  Ba Ngoai has not seen her daughter since she gave her away after the end of the war when the Communist regime threatened the lives of Vietnamese children of American mixed blood.  Thao’s father was an American soldier, her life at risk.  Binh’s family sees all Americans as rich and assume that Thao will bring them gifts, gifts that will bring them a life of ease, maybe even a move to the States.  Instead, Thao comes with little, seemingly meaningless gifts.  The entire book is a journey for Binh to understand that there are gifts and beauty to be found in her own country, in her own life.  Thao learns about the value of things that she takes for granted, how much those very things mean to the family left behind.  There is so much to learn about diversity and culture and values in this book and it is simply beautiful.  There is a quote from a story within the book told by a Buddhist monk that I love.  The story was about a rich man looking for his runaway cows.  No one had seen them and after he left, the Buddha told his followers that the mand was burdened by his cows and that they were the lucky ones, having no cows to worry abot.

Please think about your cows.  Some cows may be possessions  Others may be ideas you cling to.  Think of releasing your cows.

Although a middle grade book, it is a beautiful story that I highly recommend!

Carolyn Marsden was born in Mexico City to missionary parents. She has been a writer all her life, but THE GOLD-THREADED DRESS is her first book. About THE GOLD-THREADED DRESS she says, “I wrote this story when my half-Thai daughter was being teased at school. As a parent and elementary school teacher, I watched her struggle to establish a cultural identity. I became fascinated with a conflict that is common to many children in our increasingly diverse United States.” Carolyn Marsden has an MFA in Writing for Children from Vermont College. After spending the last twenty-five years in Tucson, Arizona, Carolyn Marsden now lives by the ocean with her husband and two daughters.