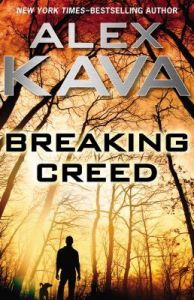 Ryder Creed and his dogs have been making national headlines. They’ve intercepted several major drug stashes being smuggled through Atlanta’s airport. But their newfound celebrity has also garnered some unwanted attention.

When Creed and one of his dogs are called in to search a commercial fishing vessel, they discover a secret compartment. But the Colombian cartels’ latest shipment isn’t drugs. This time, its cargo is human. To make matters worse, Creed helps one of the cartel’s drug mules escape—a fourteen-year-old girl who reminds him of his younger sister who disappeared fifteen years ago.

Meanwhile, FBI agent Maggie O’Dell is investigating a series of murders—the victims tortured, killed, and dumped in the Potomac River. She suspects it’s the work of a cunning and brutal assassin, but her politically motivated boss has been putting up roadblocks.
By the time she uncovers a hit list with Creed’s name on it, it might be too late. The cartel has already sent someone to destroy Creed and everyone close to him.

But Creed and his dogs have a few surprises in store on their compound in Florida. Will it be enough to stop a ruthless cartel determined to remove the thorn in its side once and for all?

This was my first book by Alex Kava, and it won’t be my last.  Breaking Creed is the first novel in the new Ryder Creed series.  Kava’s Maggie O’Dell (from the series with the same name) is also in this book.  Even though I haven’t read the other series, there was no problem with reading this new book.  Ryder, however, does appear in one of Maggie’s stories, ending not long before this one begins.

The star of this series is Ryder, a former Marine turned dog handler.  As an Army veteran and Army wife, I love novels with a military theme that are done well.  While the military itself wasn’t at the center of this book, it’s touch is felt throughout and it was done well.

Ryder and Maggie were facsinating main characters.  Although this series centers on Ryder, their individual stories were equally important and they wove together nicely.  The two characters came at the central plot from different angles and it made for a truly engrossing story with so many twists and turns.  Just as important to the story were the supporting characters, especially Jason and his friends.  They were former military and, as such, I related to their stories in different ways.  I thought that the nod to veterans and the problems they often face was extremely well-handled and done so in a way that not only shined a bit of a light on it, but also gave hope.

What I also found interesting was that Ryder’s dogs were almost as fully created characters as were the humans, with personalities and stories of their own.  Grace is the main dog and she reminded me of my Noelani, so I had a special love for her!

I love action novels with a military/government theme and this book fit the bill.  So much intrigue and mystery and I loved that I was kept guessing!  Great read!

Alex Kava is the New York Times bestselling author of thirteen novels, eleven of them in the critically acclaimed Maggie O’Dell series. Her stand-alone novel, One False Move, was chosen for the 2006 One Book One Nebraska and her political thriller, Whitewash, made January Magazine’s best thriller of the year list for 2007. Published in over twenty-five countries, Kava’s novels have made the bestseller lists in the UK, Australia, Germany, Italy and Poland. She is the recipient of the Mari Sandoz Award presented by the Nebraska Library Association. Kava divides her time between Omaha, Nebraska and Pensacola, Florida. She is a member of International Thriller Writers.

« Since You’ve Been Gone
When Heaven Fell »