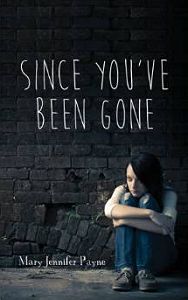 Is it possible to outrun your past? Fifteen-year-old Edie Fraser and her mother, Sydney, have been trying to do just that for five years. Now, things have gone from bad to worse. Not only has Edie had to move to another new school she's in a different country.

Sydney promises her that this is their chance at a fresh start, and Edie does her best to adjust to life in London, England, despite being targeted by the school bully. But when Sydney goes out to work the night shift and doesn't come home, Edie is terrified that the past has finally caught up with them.

Alone in a strange country, Edie is afraid to call the police for fear that she ll be sent back to her abusive father. Determined to find her mother, but with no idea where to start, she must now face the most difficult decision of her life."

Since You’ve Been Gone is a book that touches on some real issues and, for the most part, deals with them in an authentic way.  Edie and her mother Sydney have been living on the run, escaping her violent father.  The way their life has been described is so real… the hiding, the half truths, the starting over.  Edie has developed anger issues, a classic sign of lingering PTSD.  Her mother has gone the other way, overly calm to avoid anger of any kind.

I thought that Edie’s character as a survivor of domestic abuse was well developed.  Some of the choices she made after her mother’s disappearance seem stupid on the surface, but they are in keeping with someone who is used to hiding and running.  She has no trust in anyone, but her desperate need to have roots and to trust leads her to Jermaine.

The only true complete complaint I have is that I wish it had been longer.  The story was so good and had such bones.  I just felt that some of the issues could have been more developed and explored.  Edie’s anger was such an integral part of who she was and I would have liked to see more about that.  Then there was the issue of racism that came up during a scene with Jermaine and that had proise, too.

I like that the story talked about real issues and I loved that the ending was not the typical conclusion.  A good read!

Mary Jennifer Payne’s writing has been published in journals, anthologies, and magazines both in Canada and abroad, and she is the author of several YA graphic novels. Since You’ve Been Gone is her first YA novel. She teaches with the Toronto District School Board and lives in Toronto.