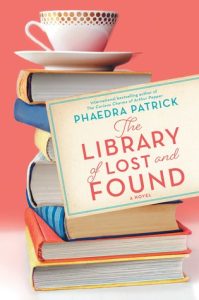 Librarian Martha Storm has always found it easier to connect with books than people - though not for lack of trying. She keeps careful lists of how to help others in her superhero-themed notebook. And yet, sometimes it feels like she's invisible.

All of that changes when a book of fairy tales arrives on her doorstep. Inside, Martha finds a dedication written to her by her best friend - her grandmother Zelda - who died under mysterious circumstances years earlier. When Martha discovers a clue within the book that her grandmother may still be alive, she becomes determined to discover the truth. As she delves deeper into Zelda's past, she unwittingly reveals a family secret that will change her life forever.

Filled with Phaedra Patrick's signature charm and vivid characters, The Library of Lost and Found is a heartwarming and poignant tale of how one woman must take control of her destiny to write her own happy ending.

The Library of Lost and Found was a charming read. It was part mystery and part coming-of-age, which was interesting as Martha is far older than your average coming-of-age characters. But I loved that, the way it showed that it’s never too late for your life to change. In its own way, the story is her journey into self-discovery, of throwing off the shackles life has put on her and finding her own.

Martha is the epitome of a people pleaser, an extreme version of such. She is such a vulnerable character, so kind and sweet, if a bit of a doormat. It was hard not to love her, to want more for her than she got from those around her. She works as a volunteer at the library, her skills and efforts vastly under appreciated by her boss. That is a theme that is present throughout the book, as she is taken for granted and used by most people in her life. When she isn’t working at the library, she is endlessly doing “favors” for everyone around her. After sacrificing her own happiness to take care of her ailing parents before their passings, she’s found herself in a rut, with no confidence or life of her own. But then she receives a package that changes everything, a gift that reveals a host of secrets.

There were some very emotional moments throughout. Very often, I was filled with anger. At her sister, for treating her like an inferior servant. At the townspeople, for the same. At her father, for his controlling, almost emotionally abusive ways. At her mother, too submissive to stand up for herself or for her daughters. But there were moments of love, too. For Zelda, for the quirkiness that she embodied. For Suki, for her own quirky personality and unexpected support for Martha, her little pushes to make Martha come out of her rut. For Owen, who helped Martha feel worthy.

For a bibliophile, this is a great story with the dual settings of the library and Owen’s bookstore. It was a wonderful read.

Phaedra qualified firstly as a stained glass artist before gaining her professional Marketing qualifications. She has worked as a waitress, stained glass designer, film festival organiser and communications manager. She enjoyed her first real writing success when she entered and won several short story competitions, and she now writes full time.

« The Wicked Hour
Beyond »