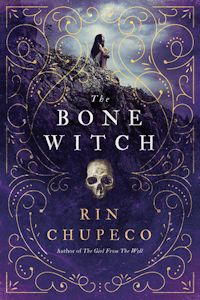 When Tea accidentally resurrects her brother from the dead, she learns she is different from the other witches in her family. Her gift for necromancy means that she’s a bone witch, a title that makes her feared and ostracized by her community. But Tea finds solace and guidance with an older, wiser bone witch, who takes Tea and her brother to another land for training.

In her new home, Tea puts all her energy into becoming an asha — one who can wield elemental magic. But dark forces are approaching quickly, and in the face of danger, Tea will have to overcome her obstacles…and make a powerful choice.

Memoirs of a Geisha meets The Name of the Wind in this brilliant new fantasy series by Rin Chupeco!

The Bone Witch is a beautiful book, telling the story of Tea as she discovers that she is an asha, one with very rare abilities.  The writing is lyrical and descriptive, allowing you to see the world through Tea’s eyes.  It is written in two alternating points of view and the voices are very different.  The first voice is that of Tea, telling her own story in a voice that, while a bit haunting, feels somehow lighter and more hopeful.  The second voice is set at some point in the future, as Tea tells her story to a Bard who has sought her out.  The tone of that voice was much heavier, much more bitter.

The mythology of this story was so beautiful, a world where, instead of on their sleeves, people wear their hearts around their necks in heartsglass.  The color of your heart sometimes determines your entire future, as it did for the main character Tea.  After accidentally raising her brother from the dead, Tea’s life changes dramatically.  She’s an asha, a Dark asha.  The Dark asha are the strongest of their kind, but also the most feared and usually the most reviled.  It is not an easy road that Tea finds herself on.

The worldbuilding was the most stunning aspect to the book, in my opinion, along with the mythology that surrounded it.  The mythology is influenced by geisha culture, Zoroastrianism, and Persian culture, woven together a complex world.  Despite the fantasy elements, the world felt very authentic with its threads of social classism, politics, sexism, and racism.  Those elements exist in all societies and their inclusion, while not positive, helped to create a world that was believable for the reader.

This is a book that I truly loved.  A sequel is coming and I am waiting breathlessly for it!

Despite an unsettling resemblance to Japanese revenants, Rin always maintains her sense of hummus. Born and raised in Manila, Philippines, she keeps four pets: a dog, two birds, and a husband. Dances like the neighbors are watching.

She is represented by Rebecca Podos of the Helen Rees Agency. She is also fond of speaking in the third person, and may as well finish this short bio in this manner. While she does not always get to check her Goodreads page, she does answer questions posed to her here as promptly as she is able to.