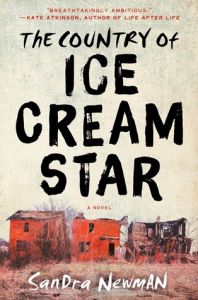 In the aftermath of a devastating plague, a fearless young heroine embarks on a dangerous and surprising journey to save her world in this brilliantly inventive thriller

In the ruins of a future America, fifteen-year-old Ice Cream Star and her nomadic tribe live off the detritus of a crumbled civilization. Theirs is a world of children; before reaching the age of twenty, they all die of a strange disease they call Posies--a plague that has killed for generations. There is no medicine, no treatment; only the mysterious rumor of a cure.

When her brother begins showing signs of the disease, Ice Cream Star sets off on a bold journey to find this cure. Led by a stranger, a captured prisoner named Pasha who becomes her devoted protector and friend, Ice Cream Star plunges into the unknown, risking her freedom and ultimately her life. Traveling hundreds of miles across treacherous, unfamiliar territory, she will experience love, heartbreak, cruelty, terror, and betrayal, fighting to protect the only world she has ever known.

The Country of Ice Cream Star came to me almost by accident.  The library on post hosted an event around Valentine’s Day called Blind Date with a Book.  I chose one based on nothing more than a genre and a vague blurb.  And it was unlike anything I’ve ever read.

It is a post-apocalyptic, dystopian, young adult novel set in the future.  It takes place in the remains of what was once the United States.  But disease and war has left the country decimated.  The overwhelming population is black or Hispanic, and even this population is left with a crippling disease that leaves what’s left of the country run by children.

The story was fantastic, filled with sometimes subtle messages about society and values.  Faith, or the lack of it, plays a huge role in how new micro-societies have been formed and how they are run.  There are shreds of recognizable faith from our own reality, but it has been changed by the experiences these children have gone through and by time.  Race, too, plays a pivotal role.  It highlights how assumptions about race can evolve into entire belief systems.

But the most distinctive aspect of this book is the patois.  This is what made the book almost magical to me.  The book was written in an evolved version of street language, peppered liberally with Russian and French derivations.  Not just the dialogue, but the entire book.  From a technical standpoint, this awes me because of the sheer creativity it takes to undertake such a thing, and to do it successfully.  And this is not a short book.  As a linguist, this got my juices flowing.

Is it difficult to read?  Yes, it can be.  Having the language background that I do probably helped a little because I recognized a lot of the root words as French and Russian and could translate those easily.  Sometimes it was the evolved English that gave me the most trouble, words that had developed over fictional time to be used in different ways, in different forms and contexts.  Nouns that are now verbs.  Verbs that have become nouns.  Even familiar places are made unfamiliar with the new language.

This patois is something that I’ve seen turn many readers away, but I urge you to give this a shot.  It probably does take a great deal more concentration to read it, but the story is well worth it.  And the concept is just so unique that the experience is fantastic.

Sandra Newman is co-author of How Not To Write A Novel. She is the author of the novels The Only Good Thing Anyone Has Ever Done and Cake, as well as the forthcoming memoir Changeling. She has taught writing and literature at Temple University, Chapman University, and the University of Colorado, and has published fiction and non-fiction in Harper’s, Granta, and London’s Observer, Telegraph, and Mail on Sunday newspapers, among other journals and newspapers.