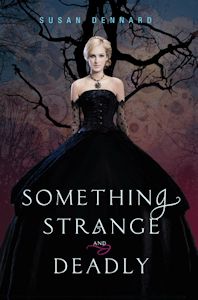 There's something strange and deadly loose in Philadelphia...

Eleanor Fitt has a lot to worry about. Her brother has gone missing, her family as fallen on hard times, and her mother is determined to marry her off to any rich young man who walkers by. But this is nothing compared to what she's just read in the newspaper—The Dead are rising in Philadelphia.

And then, in a frightening attack, a zombie delivers a letter to Eleanor... from her brother.

Whoever is controlling the Dead army has taken her brother as well. If Eleanor is going to find him, she'll have to venture into the lab of the notorious Spirit-Hunters, who protect the city from supernatural forces. But as Eleanor spends more time with the Spirit-Hunters, including the maddeningly stubborn yet handsome Daniel, the situation becomes dire. An now, not only is her reputation on the line, but her very life may hang in the balance.

Steampunk and zombies!  This may sound like an odd combination, but it is one that works!  Petticoats and parasols mixed with steam-powered machines and pulse bombs that kill zombies?  Yes, please!

The story is set in the midst of Philadelphia’s high society in 1876, the time of chaperoned dates, petticoats, bustles, séances, and burgeoning technology.  The Dead have risen, their numbers seemingly increasing every day.  The city has hired a group of veritable misfits, The Spirit Hunters, to hunt them down and protect the city.  But instead of supporting them, it seems as if they have been brought in mostly for show.

Eleanor and her mother live on the edge of high society, having fallen from favor since her father’s business went south and his subsequent death.  They are barely hanging on and her eldest brother has seemingly disappeared when they need him most.  After receiving a letter from him, delivered by one of the Dead, Eleanor seeks out the Hunters in her desperation to find out what happened to her brother.  Her choice changes her life and draws her into a mystery that she never imagined, full of intrigue, surprises, and so many twists and turns.

I loved Eleanor as a main character.  In many ways, she reminded me of Arabella Holmes in Boneseeker by Brynn Chapman, which I reviewed here.  Both of these characters are very different from most of the women/girls of their time, bucking social norms with their ideas and behavior.  I love that rebellious quality in a female protagonist!  She is loyal to her family, even to her overbearing and rather icy mother, and she has an extremely strong sense of right and wrong and she refuses to compromise herself.  She hated the social classes that dictated so much of her life and yearned for the freedom to live her life how she chose.

The Spirit Hunters truly were a band of misfits in that time.  They got no respect from the city leaders, whose city they were trying to save.  But this never deterred them from their mission.  Joseph was the leader, a black man in a less than tolerant time.  Daniel was a convict with a mushy heart of gold.  And then there was Jie.  There is so much to say about Jie, but it is best left to be discovered!

The story is fast-paced and fun, full of unexpected twists and turns.  The premise is unlike anything I have read before and I loved that!  Steampunk and zombies!

« A Matter of Mercy
July Wrap-Up »